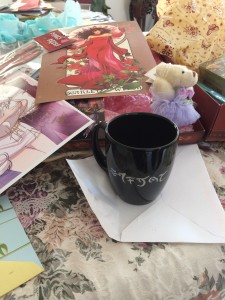 It’s occurred to me the last few weeks that I’ve been fairly neglectful of the blog as of late. Mostly because I’ve been recovering from the surgery – I’m not sure I realized just how intensive it was going to be.

I’d actually started writing up blog posts a few times, only to just let them sit in the drafts, simply because I was too tired to continue. (I did pick back up on Tumblr, though. Apparently reblogging kittens and naked men with a click of a button is a bit easier than forming coherent thoughts.)

Surgery-wise, I’m cautiously optimistic.  While the pre-surgical pain is gone, I’m not quite ready to celebrate just yet. After all, it’s only been about 4 weeks – my last surgery failed at the 6-week mark, so I’m just continuing to take it easy. (Though out patient PT will start up in the next week or so, and that should help things along.)

I’m back in the saddle, more or less – I’ve started working from home the last few weeks, and I’ve gotten back into some writing – I just get tired easily and I can’t sit for very long without getting stiff, so it’s a fine line to walk.  But – it *is* good to be creating again (and thinking creatively, for that matter.) I’m free of painkillers and narcotics for the first time in nearly a year, and it’s an amazing difference in my ability to focus, so I’m rather happy about that. Plus? I’m not so angry and depressed all the time. Chronic pain takes such a terrible toll on the body – after a while, it’s hard not to be resentful of pretty much everything, so I’m much more hopeful than before.

That being said, I didn’t do anything for the first few weeks after the surgery. I read a ton of manga and watched anime and TV shows and just took time to heal without worrying about deadlines or housecleaning or anything else, really.

Sort of a sad state of affairs when it takes a major surgery to allow oneself the time to breathe, but I can’t say it hasn’t been good for me.

This entry was posted in blog and tagged not dead yet, rambling, updates. Bookmark the permalink.