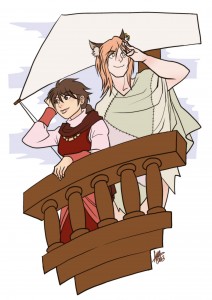 I’ve mentioned before that working with Aimo on Fox & Willow has been one of the most rewarding collaborations I’ve ever had. But it’s always sort of disconcerting when people ask how we met.

(A lot of those mumbled explanations are along the lines of “Well, we sort of met on Tumblr and we both enjoy playing Bioware games and I hired her to do a few sketches for my Abby Sinclair books and then we just basically fell into it. Also? Elf peen.”)

A long term project like F&W is a lot to ask of someone you’ve never seen face to face. Especially given we’re 12 hours apart in different countries.

Not to say we don’t communicate – we’re nearly in constant text and iChat mode on any given day, so in some ways we probably communicate more frequently than a “real life” friendship.

However, we finally remedied that the other night with an actual Skype session – both for professional reasons and the fact that it was just a little bit ridiculous that we’d never actually spoken to each other.

Not sure why we put it off for as long as we did, though I suspect there’s always a little bit of that “too good to be true aspect” involved. We were getting along so well virtually, there’s an element of not wanting to spoil a good thing. Plus, for many of us who are somewhat introverted, hiding behind electronic words is both liberating and freeing. Adding a camera to the mix can sometimes gork things up.

But we needn’t have worried – turns out we get along pretty fabulous face to face too. 🙂

That being said – I’m not sure Skype is going to replace our normal weekly meetings via Steam. Since most of our meetings are “working” meetings – involving sketches and plot discussion, I can see where the visual aspect could be more distracting simply because it’s more fun to talk than it is to work.  >_<

This entry was posted in blog and tagged aimo, collaboration, fox and willow, skype. Bookmark the permalink.