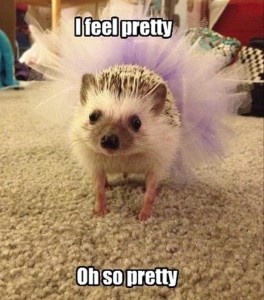 Last night was a miserable night for writing.

Anyway. Stuck on a scene in this new book. Been stuck on it for about a week. It’s an important scene – one of the major turning points for the story.

And I know where I want it to go…but my characters are balking. It’s always a bad sign when they just start posturing at each other and flapping their gums.

It’s also bad when the main character decides she wants to use her hammer to cave in the head of the possible future love interest instead of talking to him, but I digress.

Normally I’d take a few days away from it and maybe go write something else, or read or play games…but the scene won’t leave me alone. Even when I go to bed, it’s rattling in my brain. But it’s incredibly frustrating to sit down to work on it and…maybe have 200 words an hour later to show for my trouble. And then I start feeling guilty, because if only I’d CONCENTRATE, I’d be able to push past it.  (And yes, I attempted to go play some Mass Effect 3 and got stuck on a boss and finally gave up at 2 am. Only now I was twice as grumpy because I couldn’t even get past THAT.)

I suspect the best thing to do is have some sort of catastrophic event occur. I was heading there anyway, but if the threat of being buried alive by a mine-shaft collapse doesn’t get my characters moving…well, they probably deserve to die, right?

This entry was posted in blog and tagged block, cranky mccrankerson, scene, writing. Bookmark the permalink.

One Response to Stuck