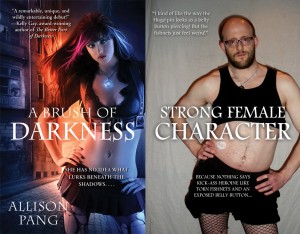 I was actually all ready to write up a post today about how writers are an awful lot like hedgehogs. With pictures. Alas, Tumbleweed is being rather uncooperative for the camera, so that’s going to have to wait for another day. But that doesn’t matter, because last night this lovely image was posted!

And I love it! (I supplied the fishnets, in fact – you can read more about it here.)

In truth though, it feels very full circle to me. I got a lot of shit about this cover when BoD came out. For a debut author, it can be a bit harsh to read comments from readers about how they would never read/buy this book because of the cover. Some people said they would be embarrassed to be seen with it. That’s pretty hard to deal with, particularly because most authors have no control over their covers and it’s disheartening to be dismissed for something you had nothing to do with – so it’s nice to have some fun with it now.

“But what about the contents?? The pervy unicorn? The incubus? The plucky, snarky heroine? For gods sake, won’t someone think about the bacon???” **

Anyway, Jim Hines has made it a bit of a thing to reshoot covers that display the female form in odd contorting shapes to show how ridiculous they can be- sort of like a real life Hawkeye Initiative. (Which is fabulous, btw – go check it out.) In this case he’s doing it for charity, which makes it even better – so when I saw my title floating about the Twittersphere as a potential choice, I offered to provide the ripped fishnets if it happened.

** I may or may not have said these things aloud at one point.

This entry was posted in blog and tagged awesomesauce, brush of darkness, covers, fox and willow, jim c hines. Bookmark the permalink.