In My Basement, No One Can Hear You Scream 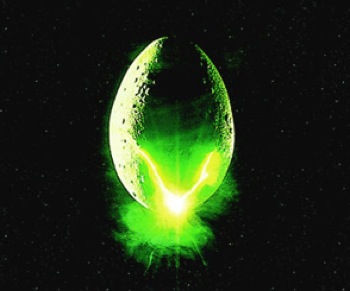 There’s a scene in Aliens (one of my favorite movies  ever, btw) where Ripley heads down to the substation area to rescue Newt.

She comes across the Alien Queen and there appears to be this little  head game going on where the Queen seems to allow Ripley to take the girl. (After Ripley displays the might of her flame-thrower/M41-A Pulse Rifle.)

The Queen waves off her little workers and Ripley starts backing away.

Except right before they leave, one of the Face-hugger eggs opens up. And Ripley gives the Queen this “Oh, hell no” look and then sets fire to the whole place.

(Honestly, I’ve been scouring you-tube for that clip and I can’t very many clips from the movie, alas.)

My point being? If I had a flame-thrower, I’d set fire to my house and walk away.

Let’s take a look at the events of this week, shall we?

1) Monday. Scheduled to work from home so I can be at the house so the contractors can rebuild our bathroom shower. And new garage doors are installed.  No big deal. All goes as planned. At one point, however, I head down to the basement to get something from the spare room. The spare room our cats live in during the winter. (Explanation in point – my cats are old and mostly outdoors. They’ve sorta stopped using litter boxes, so my compromise is a room they can destroy. We’ll pull up the carpet when they die and that will be that. I’ve come to peace with this. However – cats have not been in that room since maybe spring? Neither has anyone else. I go into the room and notice that their empty water dish is full of dead fleas. Eh. Weird, but okay. Incidentally, my cats have never had flea issues. And from what I can tell, neither of them is carrying any at this point in time.)

2) Tuesday. I go to work. DH stays home the second day of shower rebuild. I leave work early because I feel like crap and go to the doc. I have a sinus infection. I get antibiotics. I go home. DH goes down to the basement. Comes back and says there are fleas at the base of the stairs.

I go downstairs. Cat room is infested. INFESTED. (Fleas have this really interesting life cycle apparently. The eggs can lie dormant for months. But vibration – like someone walking by? Wakes the little fuckers up.  See my analogy now? *nods* I am so clever.) So I put out some flea traps. Fleas are sort of stupid, btw. Put out a shallow dish like a pie plate with some water and a little dish soap (the soap breaks up the surface tension) under a shiny light. The fleas jump at the light and then fall into the water and drown.

So I put the trap at the bottom of the stairs (not IN the cat room. Not yet.) And I catch a few. About 11, maybe?  I do this a few times and try to figure out what my options are at 10 PM at night.  I have a contract with a pest control agency so I’ll call them in the morning, I decide.

I go down to check the flea trap one last time before bed, just to make sure the light hasn’t fallen into the water pan. (It wasn’t real stable when I’d left it.) And then I notice the smell.   There’s a bathroom in my basement. That we never use. The toilet is turned off. DH has been using the shower recently while ours was out of commission, but that’s about it.

So, the smell. It smells like shit. Real shit. Sewage shit.

I check the bathroom. There is shit bubbling out of the shower drain. And the turned off toilet. And in the back room where our sump/AC drain is. (Ah, the fleas were a blessing, you see. Had I not gone down to check on them, I can really only imagine WTF I would have found the next day.)

So, I freak.  Tell the kids to put themselves to bed (which they do, OMFG) and get on the phone with the local water authority because wtf is going on in my house? In the meantime, I spend the next 2 hours siphoning shit water from the sewer pipe into the sump with a hand pump. (Thankfully the shower/toilet levels went down by themselves – though it was still pretty damn gross.)

Water guy shows up and noses around the pipes outside and says it’s not the sewer line – it’s something in our house. Don’t run the water. Call a plumber.  Emergency plumber  will cost $200 just to come out and it would be hours before he could make it. It’s nearly midnight  and the sewage has stopped so I arrange to have him come first thing in the morning.  DH goes off to work overtime.

I feel itchy. I can’t take a shower because I can’t run the water. On the way into bed, I slice my toe wide open on a set of blinds that were in the hallway (we’d removed them from a bedroom to throw them out. Whatever. I bleed. I go to bed.)

3) Wednesday. Plumber shows up at 8 AM. Pest control people say when they come, everyone will have to leave the house for 4 to 6 hours.  I buy a bug bomb in the meantime and set  it off later. It does nothing.

Plumber gets to work and snakes the lines and find what looks like half a package of wipes that were flushed down the toilet. Thanks, kids. THANKS. Costs me  $550 to get that cleared, plus had to replace the sewer pipe cap outside that the water authority broke off the night before.  (All told so far this week? $5k for shower rebuild. $2k for new doors. $500 for garage door opener installation. And this. Might as well just slit my wrists now.)

Fleas still around. Finding them here or there upstairs on the main level now. Call pest control. Arrange for Saturday fumigation because everything has to be picked up everywhere. And Thursday is no good because the garage door opener installers are coming (for the new doors put in on Monday) and I don’t know what time they’re going to be here, yadda yadda yadda.

I wash clothes and bedding continuously and shower like mad. Every moment feels like something is on me. Fabulous.

4) Thursday: Garage door opener installer shows up at 6:45. AM.  (Are you fucking kidding me? No. No he wasn’t.)  Refuse to go in basement at all even though I really need to clean up that bathroom. Every time I go down there I pick up hitchhiking fleas. No thanks. Call pest control back and schedule for Friday (today). I clean up as much of the house as I can. Vacuum like mad. Wash scrap of clothes that hit the floor. Wash the bedding again. (No, no fleas in my bed – but I’m paranoid.)

It’s also the day before Lucy’s birthday. I run out to buy some gifts and cake mix. She comes down with a fever of 101.

Of course she does.

5) Friday.  Lucy’s fever is gone but sounds like she’s getting a nasty cold.  I send her to school. Wait for pest control man.  He poisons my basement and some of the main level. Doesn’t want to do the upstairs unless we have to because of the kids and the fact that the crap is so potent it will kill our birds and hedgehog if we leave them there. Plus then I will have to leave the house for 4 to 6 hours. As it stands, I’m good to stay here in the meantime. So here I am.

I really wish to hell I could drink.

This entry was posted in blog and tagged aliens, amityville horror, fleas, fuck my life, MONEY PIT. Bookmark the permalink.

8 Responses to In My Basement, No One Can Hear You Scream