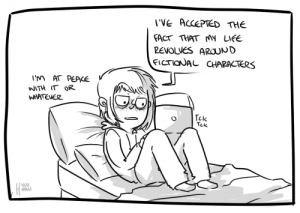 Not much of a post today – it’s lousy on the pain scale. Don’t know if it’s a result of traveling or what, but I’m not happy about it. (And for me to have taken painkillers 3 days in a row is NOT a good sign. I generally avoid most medications, but the pain and stiffness have been brutal. I go to the back doc tomorrow – we’ll see what happens. I suspect he’ll try another injection of sorts, but if I don’t get any relief, I’m going to suggest we do a discogram – which will hurt, but might give us some real answers as to what’s going on.)

Anyway, not to ramble on about my back issues, my main thought here was actually how nice it was to go back to that short story after a week of leaving it fallow…and discovering it was better than I thought. This is probably true for most people – and it’s one of the bigger pieces of advice you see from writers.

It’s one I follow, if I can. Writing under pressure and then immediately trying to edit it can sometimes lead to great things…but it can also lead to what feels like despair or a block, particularly if it’s been a tough write. Sometimes it’s enough just to finish the draft – being able to edit something that is complete is far different than trying to edit something that is still a work in progress.

I suspect this was the case with me. I’d restarted it three times – unable to finish it. But in the end, I gravitated back to the first version and that’s the one that ended up being most of the final product. I’m still not entirely sure what my malfunction about it was, but there it is.  So, after a week of working on other things and con-brain, I’ve started the editing process. (Edit, rewrite, polish. Repeat as needed – though you do hit a point where you have to recognize that a story is actually finished. Over editing is just as bad as not editing enough, but that’s the sort of thing you can only pick up with practice.)

Anyway – I should have it done and read for beta readers next week.  (You all know who you are. 😉  )

This entry was posted in blog and tagged back pain, did I mention pain?, editing, pain, rambly, short story, updates. Bookmark the permalink.