I Don’t Owe You Jack 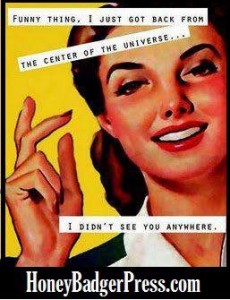 We all want them. On Twitter. Facebook. Our blogs. Tumblr. Whatever. There’s a certain niceness in thinking that our words are being heard when we toss them out into the void, but just because we put them out there, it doesn’t mean anyone is required to respond.

Jeffe had a good point on her blog post the other day about the perception of using social media to sell books – and how a social media guru at RWA last week told her why twitter is worse than facebook. Now, the thing is – media is only as good as you use it. If all you’re doing is parroting is “BUY MY CRAP” then it probably doesn’t matter what platform you use. But if you’re actually creating real networking relationships, guess what?

It doesn’t matter where you are. If people are interested in what you have to say, if they want to be friends, if they like your product…they will find you. (Certainly some tools are better and easier than others, but still.)

But here’s the thing – when you’re just starting out, it can be so overwhelming. Collecting followers becomes a bit like a feather in the cap – especially if you don’t have a lot of content or experience or products (books) behind you. You’re trying to build a readership or a following – but unless you’ve got some sort of mega buzz behind you or something, it’s a slow process.

Today, I had a blogger leave a comment on my word-whores blog. Which is fine – we love comments. Comments are great. But this blogger decided to just drop a generic “I like your blog, I just followed you, I’d love it if you could come follow me, and hey, if you follow me, you’ll be entered into a drawing to win a gift card.”

It’s the equivalent of standing in the grocery store checkout line and having someone tell you how nice your purse is and where did you get it? And then you realize they’re from Amway and they’re going to try to sell you something.

It’s rude and ridiculous. Not only did I delete the comment, but even though this blogger’s blog seemed legit -I’m never going to visit it again. And I’m not against giveaways – gods know I’ve done it – tweet this and win a book, blah blah blah. But the difference is I put that sort of thing on my OWN blog or social media outlets.

I don’t go tromping onto other people’s pages uninvited and do it. And guess what – bribing people into following you is a fool’s game. They come, enter your contest and then most of them will go *poof*.

Seems nice for the short term, but often all you get are people looking for free stuff.  Sure, you’ll probably get some people who are genuinely interested, but most won’t be. So now you’re $50 shorter and not much closer to really building anything.

At the very least, said blogger could have mentioned something about the post that was written. But no.

Bottom line? If you’re not even going to attempt to seduce me before trying to get me into your virtual bed, what the hell makes you think I’m going to serve you breakfast in the morning?

3 Responses to I Don’t Owe You Jack