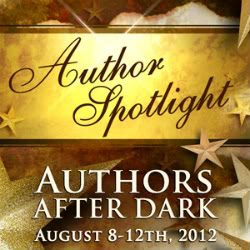 First up, just wanted to mention that I’m being interviewed over at Red Hot Books today as part of the AAD Spotlight series. If you’re interested in learning a little more about Brystion’s motivations, I suggest you check it out. (I don’t talk about him much usually, so it’s a nice change.)

Anyway, the main point to this post was just something I observed at the grocery store the other day. I’m trying to lose a few pounds, so I’m trying to watch what I eat a little closer. (Although I have to admit many days have been a rather large fail on that part when it comes to the revisions – I can’t help it – it’s stress, pure and simple.)

Anyway, I keep noticing how so many food packages announce 100 calorie versions of their snacks. Which I guess is nice in theory – 100 calories doesn’t sound like too much (although it sorta depends on what it is, doesn’t it?), and I’ll admit there is a certain convenience to knowing the exact numbers of what I’m eating.

“I can eat THIS package and that’s it.” (You know, as opposed opening a standard size bag of SmartFood and nomming the whole thing in one sitting. Which has been known to happen from time to time. )

But this mentality, while easy, doesn’t always get us the best deals either – and a lot of manufacturers bank on that. (Particularly in the diet world – remember when everything became no-fat or low-fat? Sure, there was no fat in the food, but twice the calories because of all the sugar they had to pump into to keep it from tasting like ass.)

So anyway, I was at the store the other day and buying SmartFood, because of reasons. And yes, I buy the mini-packages – because it keeps me honest. But you know, while I was there, I noticed that Smartfood is also packaging it’s own little box of “100 Calorie” bags.

Okay – as noted above, we see that a lot, and it usually means a pretty tiny serving of whatever the food is.

Except…SmartFood already comes in 100 calorie bags. The ones I’ve been buying all along, 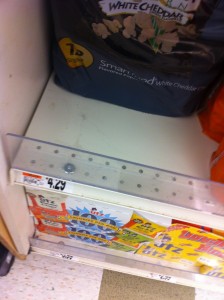 in fact. There’s absolutely no difference except in the packaging…and the price.

Kinda hard to see in that pic there, but that’s the standard black bag of 12 snacks…for $4.29

(And forgive the pic quality – using my iPhone and the store manager started giving me funny looks once I began to take the pictures. Go figure.) 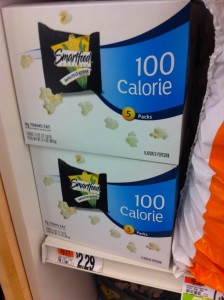 Also notice that there are only 5 to a box.

Also notice they’re charging you $2.29 for the privilege of the slightly different horizontal packaging.

I call consumer shenanigans. (No, I don’t know if the ingredients have changed any, but I would bet they aren’t somehow magically filled with unicorn sprinkles. Besides, they’re advertising the 100 calorie aspect, not that it’s got special vitamins or anything.)

It’s obviously a marketing ploy to bank off the diet craze, but in a lot of ways we make it so easy for them to do so.

After all, it’s much easier not to have to think about what we’re buying or eating when we have the production companies to do it for us, right? If it’s 100 calories, that must mean it’s okay.

That’s a bit tongue-in-cheek, but there’s a sheep mentality that goes along with the territory, particularly when it comes to things we don’t want to be bothered with. We’re too busy too look at packaging, or to read the fine print of what we’re signing. We throw money at problems and hope they magically go away without bothering to find out what the issue is.

I don’t have an answer and I suppose I could ramble on about the economy and society in general, but I suspect most of us already know all that, even if we’re turning a blind eye to it.

After all, we’ve got SmartFood to eat.

One Response to What Comes Easiest