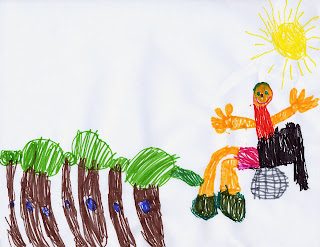 Or it should, anyway.

Overall, it was a very nice day. My father-in-law wasn’t particularly religious, so it wouldn’t have made sense to do the usual sort of pomp-and-circumstance type funeral.  He wasn’t actually Buddhist either, but much of his family is so there were a lot of little touches in that respect. I actually found it to be far more comforting than other funerals I’ve attended. Maybe it’s because it was so relaxed and laid back – there was no priest, no overtone of forgiveness or sins or anything like that. (Yeah, I come from the Catholic background – every funeral I’ve been to has been dark and depressing and terribly solemn.)

We had a table set up with his picture and bowls of his favorite foods. Anyone who wanted could light a stick of incense, bowing three times after placing it in the sand bowl. As someone who is very private about my religious beliefs, I appreciated this quiet gesture of respect more than anything else. 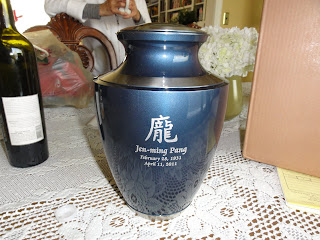 In the side room, three of his sisters, his daughter and the older grandchildren spent about three hours folding hundreds and hundreds of paper boats. (I think there were some monkeys and cranes mixed in with that too.) The end result was a massive garbage bag full of the things, all of which went into the casket. The children all got to press rolled dollar bills into his hand, so he would have spending money when he got to wherever he was going.  The younger children, Connor and Lucy included, spent much of the time drawing pictures for grandpa and writing him letters. They’d finish one and then run up to the casket and place it inside and then run off to do another one (along with flowers they’d filched from some of the displays).  One of Lucy’s is up there at the top.

There was something sweet about that, really. I wasn’t sure how my two would do with the openness of it all, but everyone handled it very nicely. It was a great way for them to remember him and the day and that’s really what it’s all about.

Afterwards we all went to the house and made spring rolls and dumplings and enjoyed the rest of the evening while extended family and friends stopped by. Bittersweet, but it was the sort of thing he would have wanted, I think.

Of course, things were a bit compounded when Lucy spiked a fever of about 104 in the middle of the day. I ended up running up to the local grocery for some meds, but she still had a fever this morning, so I took her in to get tested for strep. Not to be a helicopter mom, but I hate going into the weekend with a sick kid, especially when it costs me all of $10 to get her tested. Turns out she doesn’t have strep…but she does have flu. (And now, I do too. Hooray!)

Think I’m set up for a quiet weekend of reading and sleeping. Maybe I’ll even get some writing done.

This entry was posted in blog, sad, ye ye. Bookmark the permalink.