Fools Rush In: Whither the State of Publishing? 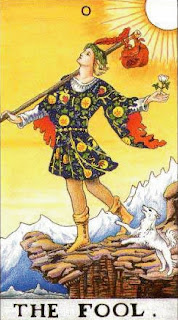 I’ve often found Tarot cards to be useful tools – for writing, for soul-searching, for fun. The Fool has always struck me as a card of potential.

Is he so absorbed with his own thoughts that he isn’t paying attention to the cliff he’s about to walk off? Is the dog warning him? Attempting to push him off? Is there another path we aren’t seeing? Or does the fool take the leap of faith to reap whatever rewards or failures await?

Note the staff upon his shoulders, the red bag a representation of his earthly belongings (or perhaps emotional ones). Are they holding him back? Or symbolizing his need to be free?

And yet, the stick may also be used for balance as he traverses the edge.

The last few days in the publishing world have been in a bit of an upheaval. One moment, we learn about self-publishing queen Amanda Hocking shopping around for million dollar deals with a traditional publisher…and the next we hear about Barry Eisler turning down a half million advance to jump into the self-publishing world.

There are plenty of people weighing in on it, and many of them are much better at explaining things than I am about the pros and cons and where the industry is going, so I’m just going to give it from a debut author’s viewpoint and leave it at that.

I actually met Mr. Eisler once, at RT 2009. It was just a quick thing, over at the book signing.  I had my “aspiring author” badge on and he asked me about what I’d written. And of course I gushed over the fact that I’d just pitched my first manuscript (BoD) and he congratulated me for actually having finished, since many writers don’t. And I picked up his cards and visited his website later (since he had told me he had some good info on getting pubbed that might be worthwhile for me to read.)

So I find it a bit ironic now that he’s eschewing that for the self-publishing road.

Not that I really care what he does personally. I’m all for people finding success at whatever they do, however they do it, but from a writing perspective it’s a little disconcerting.

For years, self-pubbing has been looked upon as the red-headed stepchild in the author world. After all, only “failed” writers did that sort of thing. If you had self-pubbed in the past, you were told never to mention it to any potential editors or agents you were trying to sell to. It was the skeleton in the closet that meant you weren’t “good enough.”

Obviously this isn’t always true – there are plenty of well-written books out there that just didn’t fit in a nice neat box that an editor could sell. And with print books, successful self-pubbing was very difficult – bookstores often wouldn’t carry the books, so reaching any sort of profitable market was nearly impossible, short of selling them out of the back of your car.

With the advance of epubbing and social networking came the ability to circumvent the gatekeepers. Now you can write and edit your book, upload it and price it at whatever you want, and advertise it to everyone on Facebook or Twitter or your blog. Instant book, ready for purchase! Obviously there are going to be various degrees of success with that. And marketing time takes away from writing time, so YMMV. Plus there’s a lot of garbage out there to wade through, but that’s probably true for just about anything.

The point is, the stigma of self-pubbing is fading. It doesn’t mean that if you self-pub a book you’re going to be met with success, but that’s true even if you’re pubbed traditionally. So much of it depends on getting the name out there, the word of mouth and all the rest of it.

I guess for me, it’s a bit distressing personally. For a long time, getting pubbed by one of the NY “big six” was held up as the dream. Make it there, and you’re golden. Maybe. And despite all the odds against it, I did make it there. On my first try.

Has it been perfect? No. There’s been quite a bit of trial-by-fire stuff going on behind the scenes that I don’t always talk about that doesn’t make me a happy camper. But it does bother me a bit to have finally “made it”…only to have people crap all over the accomplishment and NY publishing in general. Of course, it is easy to make some of these assessments if you’ve been in the industry a while. Hindsight is 20/20 and all that, but I’m still relatively new and I *don’t* know all the ins and outs of what’s happening behind the scenes. I can only go by what I’ve experienced first hand or what I’ve read about. And things are in such a state of flux it’s hard to know what’s right vs what’s right for me right now.

The sad thing is that I actually do agree with many of the traditional publishing assessments out there – about the lack of marketing for midlist authors (one author I spoke to stated that it seemed like her publisher was just throwing stuff at the walls to see what stuck…but without bothering to use any glue), or the currently lower ebook royalties.

I can see the appeal of striking out on your own.

And yet, the little voice inside me is saying…But, I just got here! What do you mean the party is now across town?

Still, I suppose I will sit and observe and see how things play out. I don’t know if I’m ready to throw myself off the cliff just yet.

This entry was posted in blog and tagged industry, writing. Bookmark the permalink.