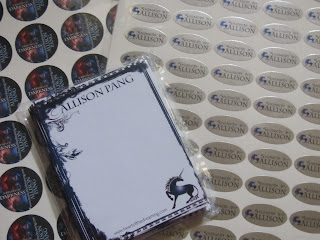 In anticipation of next week, I finally caved in and bought a bunch of swag from Ninth Moon. Not a huge amount, and not stuff I really plan on giving away in large  quantities. The “Signed by Allison” stickers were a no-brainer, since I’m already getting requests for signed copies of BoD. I also got a sheet of little round stickers with the cover and some note-pad sheets (really just to have something nice to write little notes on, go figure!). Between that and the ton of bookmarks I still have left over I should be good.

I wasn’t entirely sure about the rest of it – things like book plates and pens *seem* cool, but right now it’s more of an expense than I feel like doing. Although I have had some requests for swag (mostly in the form of bookmarks, which I’m happy to mail out), I don’t want to get stuck in a marketing loop where I’m constantly at the post office. I may look at getting a little more for specific conventions for the tables, but to be perfectly frank, I’ve *never* bought a book based off picking up a pen. I take it because it’s free. Could just be me, though.

And incidentally, the folks at Ninth Moon were an absolute joy to work with and very fast.

As to the rest of things, it’s been a fairly productive weekend. I’m pretty much caught up on the interviews (though I know there are a few more coming in), I started work on a small, sort-of-secret web project, I got a couple of guest blogs written (need to finish up another one today), managed to get my garbage disposal working again (OMG YAY! Now it doesn’t look like the sink vomited every time I run the dishwasher!) *and* I picked up one of those sweet Epic Purple Shirts from Hot Topic. They’re in men sizes though and all they had were Large or X-Small. Went with the X-Small – it will be okay as long as I never wash it. *cough*  Might look at trying to find a small or a medium some other time, but for now I feel rather epic wearing it around the house.

Also, awesomesauce Sara McClung is giving away an ARC of Brush of Darkness this week! Go check out her blog and leave a comment!

This entry was posted in blog and tagged random, swag, updates. Bookmark the permalink.