Memories Made of Tin 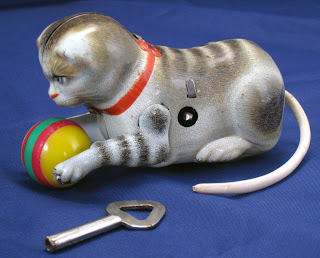 When I was little I remember going to my grandmother’s house (particularly around the holiday – she always had this little ghetto tree made of silver tinsel next to her TV. She would sit and smoke and watch Days of Our Lives. Undoubtedly bored, my brother and I would wander off and try to find something else to do.)

She lived in this huge monstrosity with three floors and an attic and a basement and a yard that seemed to stretch out for miles. The foyer had a deep purple carpet and crystal pane windows on the front door that would leave prismatic rainbows all over the floor.

It always felt very somber to me, but I still liked it (almost like a church, I guess.). My grandfather had an office in there too at one point – I seem to remember there were gnomes pushing wheelbarrows on some of the decorative tiles above the fireplace. Or maybe it was rabbits. Either way it touched a nerve.

My point being it was a really awesome place to go – my grandmother always had a ton of old stuff in the cabinets – china dolls, tea sets, a miniature cast iron stove with little skillets. (Almost like a 1900’s version of an Easy Bake Oven…except you could actually light this one for real and make eggs on it.). I think my brother has that stove now. I got the My Book House books and a 100 year old china doll…but the biggest draw for me was the glass menagerie and the wind-ups.

One of the cabinets was filled with little glass figurines – mostly animals. We weren’t really allowed to play with those, but I would stare at them for hours. In particular there was a white stag, which I think was actually painted lead or pewter. (I was pretty heavy into my Narnia phase at that point, so I was all about that stag. Not to mention there was an honest-to-goodness wardrobe up in the attic, filled with fur coats. My dad used to take me up there and tell us were were going to go into Narnia. Fun…but sort of cruel too, because I was always so disappointed when we didn’t actually run into Aslan. I did end up with the stag many years later. It always makes me smile to see it.)

And then there were the wind-ups – mostly made of painted tin. I think the majority of them were German (probably from about the 1940s or so). If we were good, we’d be allowed to take them out and wind them up with their keys and let them do their thing – the cat up there was one of them – it would zoom all around the floor and roll over, but I also recall a small elephant with velvet skin – when you wound it up, the tail and trunk would move around. There was an orange and red beetle, which my brother took home one year, and a clown that was supposed to hop around on its hands…but it never seemed to work right.

There were others that I don’t really remember at this point, but it’s just one of those bittersweet things, I guess. I’ve been thinking on that more and more as my kids get older, particularly as I start looking for toys for them for Christmas. Most things today are made of plastic crap – everything is disposable, from the technology to the toys themselves – nothing is made to last, and nothing is really given the substance of years. No one takes care of their things, and no one is expected to.

It sort of reminds me of the Velveteen rabbit – how a child’s love makes something “real.” Hard to find anything these days that is worthy of that type of love.

Oddly enough, Lucy did find a bag of my old stuffed animals in one of the closets and is now running around with a 30 -year-old stuffed Snoopy bean bag. He has no eyes, and no nose. His ears have been torn off and resewn so many times I’ve lost count.

This entry was posted in blog and tagged memories, rambling, toys. Bookmark the permalink.