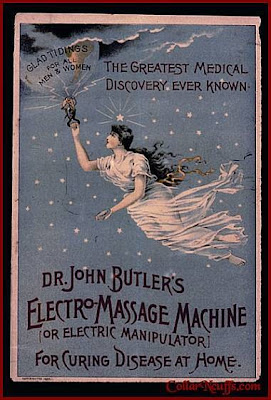 It always sort of cracks me up that for all that people of the Victorian age seemed to be such uptight prudes, they certainly had some weird practices when it came to curing feminine “hysteria.”

I’m actually trying to imagine a world where sexually unsatisfied women would go to their doctor complaining of anxiety, sexual fantasies and shortness of breath – and the solution would be for the doc to manually frig them to orgasm.

Apparently this was very tiring to the doctors (and it would often take an hour or more to produce the desired effect. Incidentally, WTF was up with men during this time? An hour? Really?)

Part of me would have imagined this was some dreadfully pervy and sordid affair – ladies heading out for tea and a twiddle during their daily constitutional, but no…the docs apparently saw it merely a type of chore and often tried to pan it off on their lesser counterparts. (But not midwives…oh, no – couldn’t possibly let there be any competition for these “services”.) 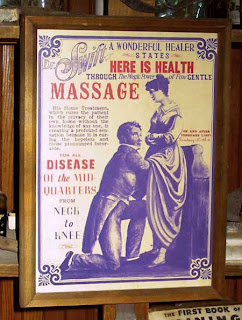 Still…the topic was often danced around as being a health issue, as opposed to a sexual one. I suppose that’s all right if it made women happier, but I find the need for subterfuge irritating in the extreme. 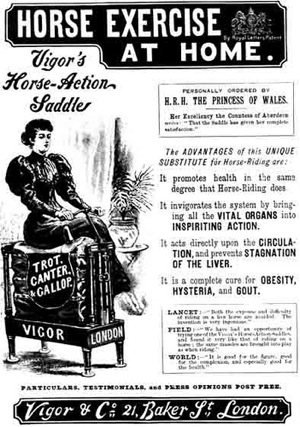 (Basically a steam-powered mechanical “horse”  created in 1870. And it cures gout AND obesity too!)

Anyway, there’s a ton more info on this sort of thing (and in far more detail than I feel like getting into here), but even cooler is the new movie coming out that actually goes into the historical detail of the creation of these vibrators. Called Hysteria, it will start Maggie Gyllenhaal, Hugh Dancy, and Rupert Everett.

For additional info on this topic, check out a few of these sources:

The Straight Dope
Victorian Sex Machine
The Technology of Orgasm – the book that started it all. 🙂