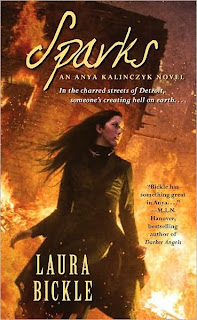 My good friend, Laura Bickle, just had a new release the other week – Sparks. (Shameless pimpage – go *buy* it, my friends, and the first book in the series, Embers.) Aside from the fact that the book contains some excellent writing (and all the ghosts, elementals and fire action you could hope for), the book also boasts a sidekick.

And not just any sidekick – he’s a fire elemental, also known as a salamander, who goes by the name Sparky. Sparky is a hoot and easily one of my favorite characters in the book. Even though he doesn’t talk, he’s definitely got a larger-than-life personality – but his presence never overrides the story.

However, this got me to thinking a bit as to the popularity of animal sidekicks in books. Quite a few novels them have them, although the form and format change a bit, depending on the author or the story. And animal may be a bit of a misnomer as well – sometimes they’re magic creatures and sometimes they’re not.

Of course, I do it too – A Brush of Darkness does contain a unicorn sidekick, but I’ve also played a number of PbPs where my character got a familiar of some sort as well. And truthfully, Phineas started out as just being a bit of an inside joke – he was only supposed to be in a few chapters…and then *bam*, he decided he actually did belong there. Sure enough, when I dug a little deeper, I found his purpose. And then he started to talk and it was all downhill from there.

But I guess my question is why do we write them into our stories? Are they plot devices? Major characters? Comic relief? All of the above?  I’ve seen the usual run of familiars – summoned daemons, accidental acquisitions, family heirlooms, “bonded” creatures – the list goes on and on. Cats, dogs, wolves, dragons, horses, gargoyles – anything and everything is fair game.

Sometimes it becomes a question of how much cognizance the animal has – Do they talk? Can they reason? Are they simply there for comfort? Do they see ghosts? Walk through walls? Shapeshift?

There probably isn’t a right or wrong answer to this, but it’s sort of fascinating to me that we do it at all. I suspect many of the authors who do use animal sidekicks probably had a beloved pet or two from way back that were used as “inspiration.”

This entry was posted in blog and tagged phineas, sidekicks, writing. Bookmark the permalink.