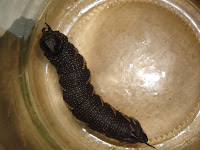 This is a tomato hornworm that I found on my front step the other day. It was really big. Like the size of my index finger (girth and length).

I did a little research and found out that it either had a horrible disease. (whee) or that it was just a genetic mutation – i.e. a less common brown form.  In either case, I captured it in a jar and the kids and I watched it wiggle about for a bit and then we let it go. Yes, it’s a pest bug – but I don’t grow tomatoes, so I don’t really care.

Which is sort of how I feel about writing rules. (Nice segue-way, huh?)

After yesterday’s LJ interview, I did have a few questions posed to me off-line, and one of them was about writing rules. Specifically, which rules do I actually set myself up to break?

And the answer here is…none – because I don’t actually try to follow them.

Now, there is a bit of a caveat to that. Certainly I want to make sure the grammar makes sense or the dialog structure propels the story along and things like that, but truthfully, a good story tends to transcend the “rules”.  As a reader, think about the last time you were really, truly absorbed in the world of a book. Were you paying attention to dialog tags? Fretting over why you didn’t know what the hero’s GMC was? Aghast because the author dared to use the word “was” to help describe something?

Or were you just gobbling up those pages in a frantic urge to find out what happens next?

For writers, I think the key is being aware of which rules you are breaking, more than anything else.

Take head-hopping, for example. When I first started writing “seriously”, I tended to do it a little too much – but that was mostly because it was a bad habit I picked up from playing PbP games – between coposting (writing with other people) and trying to be somewhat omniscient in the descriptions, I made some major boo-boos. Can head-hopping be done within a book? Yes, and done well, but the difference is that a newbie writer (like I was) might not be aware of why it’s not always a good idea to head-hop – i..e done badly, it can be very difficult for the reader to follow along.

On the other hand, if the author sets out knowing the limitations of head-hopping and decides to do it anyway (and it *works*),  more power to them.

I do think that writers new to the craft can be a little too vehement in their defense of the rules. (Which sort of makes sense. When you’re just starting out, rules are really all you have.) On the other hand, some people tend to get a sort of rule-blindness. If the story doesn’t conform within a set range of “accepted” standards then it immediately gets picked apart as being WRONG. **

Which is crap. I’m not talking about good writing basics like show vs tell or PoV concerns. Just that there’s often a fine line between telling a good story and getting so wrapped in the minor structural details that you never actually finish the book. You probably know someone like this – a writer who is a compulsive rule-follower and who continuously writes and rewrites that same first chapter over and over and over. They can never decide for themselves what is right, and become completely dependent on the opinions of others – even when that advice is conflicting.

When I was just starting out, I was in a critique group – and not the right one, either (which is another post entirely). We were all beginning writers, but none of the other members were writing or had read much UF/PR, so a lot of my critiques were nitpicking at things that tend to fall under “romance rules” – i.e. the hero and heroine have to meet each other within x number of pages, for example. Not being much of a romance reader, I had a very hard time wrapping my head around a lot of these concepts and I found that when I forced the story into one of these molds, my writing really suffered.

So maybe it’s not really about following or breaking rules so much as it is about trusting your own voice. Grammar can be fixed later, as can other, more exterior flaws. But the core of the book is the story. Voice can’t really be taught. It can be developed and strengthened, but as long as it  is solid, then the rest of the details are just that. Details. And easily changed.

Which sort of brings me back to my hornworm up there. He doesn’t care if he’s brown instead of green.

Inside, he’s still a hornworm.

**(Seriously? Go read The Road, for example. There aren’t any chapters – it’s almost a running stream of consciousness. But it *works.* Would the book have had the same impact if the author followed standard grammar rules? Maybe. Probably not the way it’s written, though.)

This entry was posted in blog and tagged craft, rules, writing. Bookmark the permalink.