Slang a Lang a Ding Dong 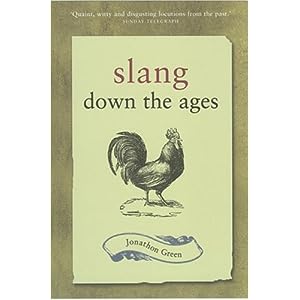 Seeing as I’m home with a sick kid today, just a quick post about another writing resource dealing with language.  It’s very similar to the Dictionary of the Vulgar Tongue, but in some ways it’s much better laid out. DotVT is essentially just that – a dictionary, which makes it a little hard if you’re looking for something specific.

Slang Down the Ages is actually set up in chapters. There’s the usual suspects, dealing with sex, male and female body parts, bodily functions and insults – but there’s also some great stuff about different types of food, speech, clothing, death and some of the more common types of jobs (including prostitution).

Now, a small word of warning – there are several chapters dealing with different ethnic groups and sexual orientations. A lot of it is offensive to the more modern day sensibilities – although I suppose that’s pretty much the point when it comes to slang. On the other hand, the author doesn’t really skip anyone, so it’s not like anyone is getting singled out for mockery.

The author is also good enough to put down what century a particular word or phrase may have originated from, which is perfect if you are doing a historical novel and you don’t want to get dinged for accuracy.

My favorite sexual euphemism so far: “To dance the blanket hornpipe”

This entry was posted in blog and tagged resources, writing. Bookmark the permalink.

One Response to Slang a Lang a Ding Dong