Thrill Me With Your Acumen 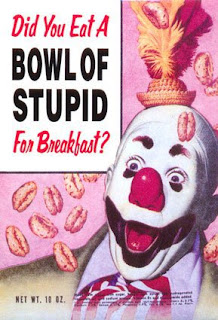 I’ll admit I’m not much of a reviewer. Not of books or music or movies, or really anything else. Not because I don’t have an opinion, but I can’t be bothered to make the effort. (I probably should, particularly on GoodReads, but that’s another story.)

If a reviewer likes or dislikes something, I want to know why. What was it that struck him or her as good, or great, or just plain terrible? I understand that things can’t always be explained. Sometimes things just don’t resonate for whatever reason, and that’s fine too. One can simply say, “I didn’t like it.”

But being a reviewer doesn’t give you the right to bash. Personal blogs may be a different matter, but if I read a review on a “professional” site, then I really to expect that review to have at least a modicum of decorum.

Which brings me to the crux of the post. No, this isn’t about me – I don’t have any reviews yet (not counting a few on my cover which I had nothing to do with – can’t take issue with those.) That in mind, no I have no plans to ever rebut any sort of review of my book anywhere. It’s not a winnable situation, for any party.

However, that doesn’t mean I can’t get my ire up for other people. And so I bring to you Exhibit A – a review of DG’s newest album, Rock Symphonies. I’d link to it, but apparently the entire article was removed due to “Spamming”. However, it’s cached. Right here. (And if that doesn’t work, just search for parc bench and david garrett and then click on the cached link.)

Also, please note, yes, this is about DG. Yes, I’m a fan(girl). But…here’s the thing. I don’t care if people don’t like his music. Or they don’t like cross-over. That’s fine with me. Hell, I don’t actually care for all the songs on the new album either. But articulate the points, is all I’m asking. This particular reviewer not only couldn’t seem to do so, he resorted to name-calling afterward when he didn’t like the responses he got. (Probably why the article was removed). Here’s a snippet:

How painful is it? Let’s put it this way – expect to see a PBS special featuring this crapola soon. No doubt this misguided mish-mash of sound will be used as a fundraiser appealing to middle brow tastes that know nothing about classical music (and that have no real respect for rock). No doubt it will be filmed before an audience of German folk who don’t have any taste, just like a tacky Andre Rieu concert.

David Garrett is just the latest in the PBS chain of trashy European musical acts that think they can pull off some sort of pseudo-sophistication, and fool good old Americans (who should know better) into thinking that their brand of music has the right to exist. This is just my way of saying that German model/violinist/latest PBS gimmick David Garrett being accepted as some sort of listenable gimmick is a bad thing. It is bad for classical music and it is bad for rock music. Besides that, here is wearing a stupid T-shirt that reads “Fighting for peace is like having sex for virginity.”

…This kind of musical garbage has been quite successful over the past decade in Europe. The assault on classical music and rock music must be stopped at our borders. Just because a guy looks like Axl Rose for his album cover doesn’t mean he can rock. And just because some guy with a foreign accent plays a violin really, really quickly doesn’t mean he is musical; he’s just fast.

So yeah. Don’t tell me anything about the music. Bash cross-over. Bash what he wears. Bash Germans. Bash everyone who doesn’t agree with you. Smashing review, eh?

I did respond, of course. (And got a little rambley – mostly because it was about 1 am when I wrote it):

See, here’s the thing. When I read a review about something, I expect it to be specific – about the music, or the words, or the art or whatever it is. If you did not like this album, that’s fine. I can fully admit Rock Symphonies isn’t my favorite either – but what I’m not seeing here is a thing about the music itself. I don’t see an opinion about the arrangements, or why you may have disliked the chord progressions, if you heard a note being flubbed or that the range was lacking – in short, nothing about the *music.* For a critic, I find your own mastery of words to be as sorely lacking as you appear to find Mr. Garrett’s music. Since all you can do is harp on “teh 3vil X-Over”, I suspect you don’t know that much about critiquing music either.

I do see a personal attack on the artist, and for what? His clothes? His looks? His ability to shrug off the blatant snobbery of classical music fetishists to play what he wants? (And oddly enough, I don’t see Aerosmith freaking out that he’s ruining rock music. Fancy that. By your logic, we might as well toss out Apocalyptica too – the four virtuoso cellists who covered many of Metallica’s songs – and Metallica liked them so much they actually *sold* their albums at their own concerts. Win-win all the way around.)

I read all the time about how people lament that classical music is dying, that we don’t appreciate the finer aspects of music, that we’re killing off music classes in schools, and children aren’t getting the sort of exposure that they need. All true. So why so much disdain for a genre that might actually increase interest? A Nirvana fan might be piqued enough to see what else David has done (including his more traditional work), which in turn might lead to a greater appreciation for classical music in general.

That’s the beauty of being able to enjoy music on whatever level the listener finds worthy. So many classical purists seem to want to lock their “vision” of what the music should be in a cage…and then wonder why the general public seems disinterested. When you treat us “good ‘ol Americans” like the intellectual equals of something you’ve scraped off the bottom of your shoe, don’t be surprised when we turn our backs on you.

Classical snobs also tend to be aghast at David’s casual appearance on stage, as though that indicates some sort of “disrespect” to the music. Last time I checked, looks didn’t have anything to do with musical ability at all. Would Mr. Garrett’s success be more palatable to you if he were some knuckle-dragging, mouth-breathing troglodyte? Next time, try shutting your eyes and opening your ears.

Or stay in your cave, surrounded by your fossilized ideals of what music “should be.” I assure you, the rest of us won’t miss you a bit.

Maybe a little over the top. However the reviewer quite easily made my own point for me with his response:

As Meredith Willson wrote in “The Music Man”:

I suppose it’s his right to just ignore the responses, brush us all under the table as though we’re not worth the time. Just fangirls, after all.

It’s that same elitist mentality that prevents the “average joe” from *wanting* to be part of the classical music scene.  (Or to take a big step here, you might even compare the cross-over vs classical to that of literary vs commercial fiction. It’s the same damn thing, right down to the snobby attitudes. What? Just because I write genre and not, oh, excuse me “speculative fantasy,” I’m not worthy of being read?)

This entry was posted in david garrett, rant, reviews. Bookmark the permalink.

3 Responses to Thrill Me With Your Acumen