Using What You Have aka Making Do 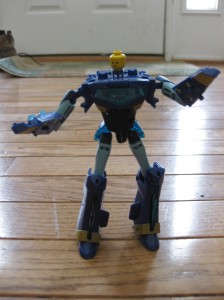 Connor made me take a picture of this yesterday. And I did – not only because it seemed like a good blog topic, but also because I giggle madly every time I look at it.

I find it very interesting that kid will usually make do with something, even if it’s not exactly right or perfect. In the interest of saving the universe, of course.

Writers often do this too. Or at least I do.

I’m not a huge researcher. Unless the plot hinges around a particular detail that *really* has be accurate *right* this second, I have a big tendency just to toss something in as a place holder. Sometimes it’s just laziness, sometimes it’s just to keep the momentum of the story going. One of those things where I have to weigh the amount of time spent researching vs actually getting something done, and does it really matter if I mention the cloister robes are red in this paragraph, when in reality they were probably blue?

Don’t get me wrong – I’m all for world-building and being accurate (and in theory, if you’ve got time to make note of how things are/should be before you get to the actual point of writing that’s probably for the best.), but I suspect some people get so caught up in the details of the research that they never really get around to writing much of anything.   They’re in love with the concept of writing, but not so much with doing it, and they use research as an excuse.

And details *are* important, but getting the lines of the story out can be just as important. Details can be added back in later, or tweaked during edits, but as long as the core of the story is solid, the rest of it is gravy. (And probably interchangeable, honestly. Star-crossed lovers are nearly always some flavor of Romeo & Juliet, deep down in their torrid little plot devices, for example.)

Personally, my time is so limited that I don’t always have the time to do large amounts of research up front – so I tend to just look up whatever quick factoid I can off of Google or wherever (enough to get me started) and then I run with it. Obviously, if I’m not careful, I could end up with something ridiculous or wildly inaccurate. On the other hand, it could also lead to something brilliant that I might not have thought of if I’d been totally obsessed with the facts being “perfect.”

Just ask Lego Man. He got a new body, saved the universe, got the girl (whom he is now tragically involved with because his robot body doesn’t allow him to experience the finer points of love), and moved on to lead a Jedi army. He also got his head stuck up the backside of the moose, but that’s 7 year old plotting for you.

This entry was posted in blog and tagged craft, writing. Bookmark the permalink.

One Response to Using What You Have aka Making Do