The Keeper of Memories 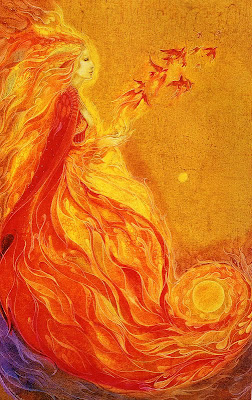 Against the betterment of my diet, I bought a package of circus peanuts at the store this week. The original orange ones. My grandmother used to give them to me and my brother when I was very young and we went to visit her at her tiny beach house on LBI in the summer.

It’s funny how something that really tastes so craptacular can still have the power to transport me back to that time. So I eat the whole damn bag, each bite releasing a moment I haven’t given thought to in a very long time.

I remember the green sofa I used to sleep on sometimes – the one that always had sand on it, no matter how many times I’d try to brush it off. The tiny swindle glasses that I was allowed to use to drink real Pepsi. The ceramic chicken-shaped bowls I would eat scrambled eggs out of. The bedroom closest to the ocean with the seashell sheets. The crappy lawn with the prickly grass that never seemed to really green. The glass apple on the mantle. The frosted cupcakes my grandmother used to buy from the refrigerated section of the grocery store.

(And gods help me, I cannot remember who used to make them – they came six to a package, which was basically a tin-foil tray. I always used to eat the chocolate frosted one and there was always a tinny aftertaste to it. I’d love to find them again, but I don’t think they make them anymore.)

I could probably go on all day, but for the most part these sorts of memories are probably pretty boring to people. I seem to be leaking memories these days, and not always very good ones, so this was a nice change.

The doctors are beginning to think I’ve got some sort of autoimmune thing going on now- and whether or not it’s psychosomatic in nature or not, what I can tell you is that the joints in my hands and feet have suddenly exploded into an ass-bucket of pain. I am going to undergo some tests  soon to try to rule out rheumatoid arthritis, among other connective tissue diseases.

I know that I have repressed a great deal over the last several years. Why it’s coming to a head now, I’m not entirely sure. Maybe it’s just time.

I have one final memory of my mother. It was after her second round of chemo and several rounds of radiation and she finally decided she wanted to show me her head. Her hair had started falling out in clumps several weeks before, and it had upset her greatly, for obvious reasons. She had 13 tumors in her brain at that point, so she was getting the treatment directly to her head. It was pretty blistered and dry and the wigs were getting too hot and scratchy to wear for long, so she’d taken to just wearing the cancer hats – the padded bandannas and the like.

Anyway, so my last visit to her, she finally decided she wanted to show me. And we went into the bathroom and she removed her hat.and we looked at her reflection in the mirror. It strikes me now that neither one of would have been able to handle me looking at her directly. For some reason, the reflection was a barrier of sorts. She gave me this sort of self-deprecating smile and started to cry and then she put the hat back on. We didn’t speak about it, but when we sat down on the sofa, I curled up next to her like I did when I was little. I put my head on her lap and she stroked my hair.

By the following weekend, she was gone.

I haven’t cried about anything for nearly 8 years now.

And yet today, I can’t seem to stop.

This entry was posted in grief, memories, mom. Bookmark the permalink.

12 Responses to The Keeper of Memories