Rebel Without a Cause… 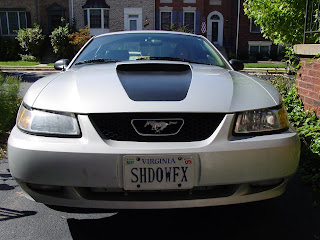 Well, not really. I was thinking on that Prague blog post from a few days ago. I don’t think I ever went through that “finding myself” crisis. The most I ever did was buy a Mustang when I probably shouldn’t have. More specifically, I still owed $8,000 on my Saturn and yet somehow when I went to “just look” at the Ford dealership, I ended up driving away with a 35th Anniversary Special Edition Mustang. Only about 4,628 of them were made – 1,259 of them in silver.

I was 25 and stupid, I guess. I didn’t need a new car, but some perverse side of me decided I wanted one anyway. Mr myn was only my boyfriend at the time, but in a major act of good faith, stroked me a check for $1000 to use as a down payment. The rest of it I took up the pooper for some ungodly monthly amount. 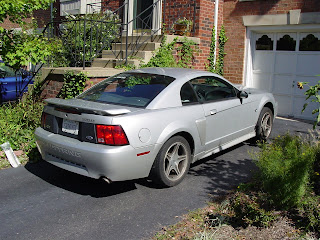 So there I was with a nice solid V8, 260 Horsepower and 302 pound/feet of Torque. (Not bad for an out of the box in 1999). Clearly, by way of the license plate, I was just as big a geek back then. That’s Shadowfax, guys, not Shadowfox or Shadow FX. And if you have to ask? Don’t.)

That being said, I was utterly in love with the car, and at the time I thought it was worth it. I was unmarried, childless, apparently had cash to burn. I know my dad tried to talk me into something sensible…a 4 door. A Jetta. Something practical. And I was like – why be practical? Plenty of time for practicality later. Much more fun to see how fast I could blitz down the beltway. And yeah, something about having a sports car, even a little one like a Mustang – it kind of turns you into a bit of an asshole when you drive. At least for that first month or so. Though there’s nothing quite like taking a turn over a pile of wet leaves and having the whole back end spin you out to take you down a peg or so…

I had to trade it in once Connor was born. I hated to do it, but there was just no way I could get the car seat back there *and* have room for a front seat passenger. And so I grew up. Sort of.

These days Connor likes to hear that I used to have one…though he’s not so happy that he was the reason I had to sell it. (Not that I told him in those words, but he’s pretty smart like that.)  I drive a practical Murano now, but don’t be surprised in a few years if there’s not a new silver bullet of some sort sitting in the driveway.

This entry was posted in mustang, random. Bookmark the permalink.

3 Responses to Rebel Without a Cause…