Princess for a Day 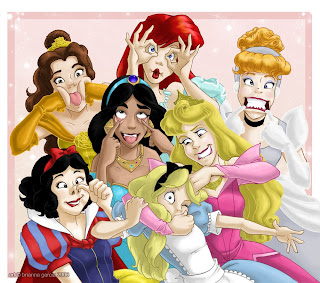 When the sisters rose, arm-in-arm, through the water in this way, their youngest sister would stand quite alone, looking after them, ready to cry, only that the mermaids have no tears, and therefore they suffer more. “Oh, were I but fifteen years old,” said she: “I know that I shall love the world up there, and all the people who live in it.”
At last she reached her fifteenth year. “Well, now, you are grown up,” said the old dowager, her grandmother; “so you must let me adorn you like your other sisters;” and she placed a wreath of white lilies in her hair, and every flower leaf was half a pearl. Then the old lady ordered eight great oysters to attach themselves to the tail of the princess to show her high rank.
“But they hurt me so,” said the little mermaid.
“Pride must suffer pain,” replied the old lady. Oh, how gladly she would have shaken off all this grandeur, and laid aside the heavy wreath! The red flowers in her own garden would have suited her much better, but she could not help herself: so she said, “Farewell,” and rose as lightly as a bubble to the surface of the water.

So I did the spa thing today. Or the princess thing. Whichever your prefer. I don’t do it very often, but I had a lovely gift certificate from mr myn to the Red Door Spa which essentially got me a facial, mani, pedi and a make-up touch-up. And of course, once I’m there, I can’t really resist adding a little more to it, so I ended up with some waxing as well. Ideally I would have gotten a massage, but most spa/massage places won’t touch me since the surgery, and one look at the 3 inch scar on my back would send them running for fear of some upcoming lawsuit. And so I settled for some organic creme de something slathered over my face instead. (And, yeah, I just read back over that and realized that probably sounds worse than it should. Pervs.)

Now, I’m all gussied up with no where to go, at the moment. (Although I hear tell mr myn is coming home shortly. Based upon the fact that the lower half of the house is spotless and he’s been out shopping for winter clothes for the kids, I suspect dinner is on me).

Ah well. My princess points have been well spent. Although, I do have to point out, there is nothing princess-like about lying spreadeagled on a paper covered table while the nice lady with the spatula coats me in wax. Less so by way of the language that comes pouring out of my mouth while she works. A word to the wise: If you like to keep the trim…well, trimmed, I guess…it behooves everyone if you can keep up with it. They don’t say every 4 to 6 weeks just because they’re trying to gouge you. (At least, not most of the time). I was doing rather well over the summer, but after the back surgery, Brazilian wax jobs were kind of low on my priority list.

So now, off to dinner with my kitty-cat eyes. (Connor seems to be freaking out at the “professional” make up job. But in a nice way.)

And tomorrow, back to being me. 🙂

4 Responses to Princess for a Day