What Is the Airspeed Velocity of an Unladen Swallow? 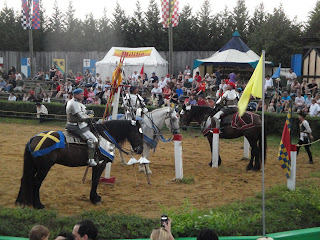 Lazy weekend this weekend, but on a lark we decided to head up to the Maryland Renaissance Festival for some Steak on a Stake, jousting, peasant wenches, drunkards and shirtless Celts in kilts. And a good time was had by all. (Even when it started pissing rain later in the afternoon.)

We’ve taken the kids to it before, but this was the first year I think they both sorta got something out of it. Last year, Lucy really wasn’t quite sure what was going on, but this time around she figured it out pretty quick. And once both kids stopped whining about wanting to buy something every 2 booths, it worked out pretty well…though, I’m the biggest sucker when it comes to these sorts of places. “You mean, you want that shiny dagger and matching gorget?  Can Mommy borrow it? Sure!” But what the hey, I had a little extra cash and why not use it? 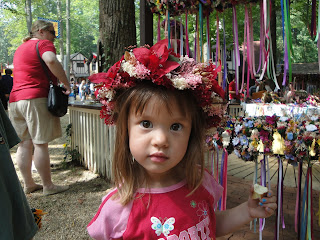 First stop was at one of the booths that sold the head-wreaths. Lucy was very insistent that whatever she got had to match her outfit – picked it out by herself and everything.  Of course, she only wore it for like 15 minutes and then decided it was too big for her, so I ended up wearing it the rest of the time, because I have no shame.  (See above paragraph).

And to note, she also wanted one of those fox tails that people sometimes wear around her belt…and yup, she got one – a little tail in crimson. (Gotta match, of course). And, *cough*, I got a regular tail…maybe mink? I was working it pretty good though.  🙂 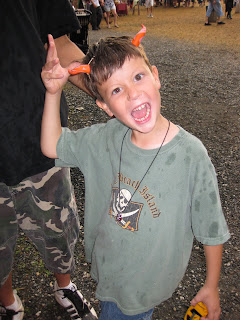 Got Connor some satyr horns, too (although I already have a pair at home from an earlier visit 10 years ago.) Not sure he was really interested in them, but we got into a bit of a tiff because he wanted a  wooden sword – problem is, we bought him one last year, which he still has.  It still didn’t sit with him very well, because we ended up getting Lucy a little one.

Problem was solved when we got home and they traded, and he ran around with her wooden dagger, and she ended up with something almost twice as long as she was.  LOL.

He wanted some real armor too, but I have my limits… 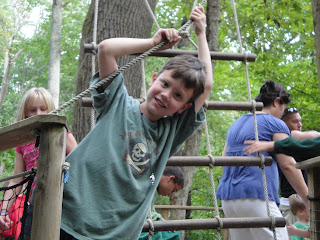 Hanging out at the pirate ship play area… 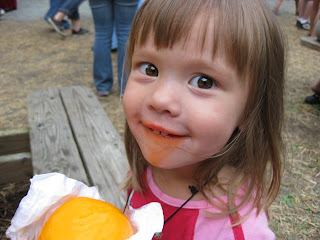 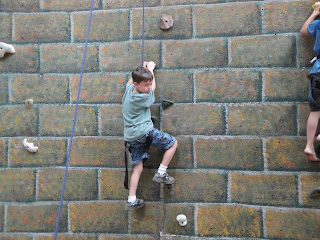 Have fun storming the castle… 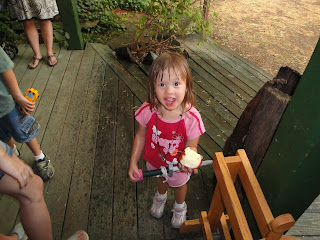 Taking shelter from the rain. Her sword was peace-tied, but she strutted all around the place with one hand on it. Total natural.
The apple is because she was getting pissy at one point and a very helpful fruit seller essentially offered her an apple from her cart. Wonder of wonders, it worked!  (‘course it cost me a dollar for the apple, but it kept her quiet, and silence is worth a lot.  LOL). 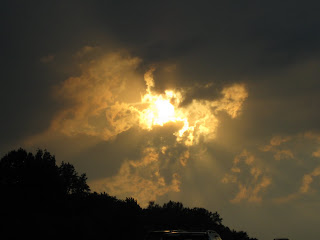 Lovely sunset after the rain (taken from the car on the way home….)

This entry was posted in random, renn faire. Bookmark the permalink.