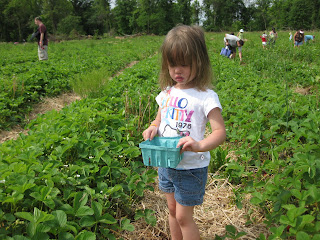 So we went strawberry picking on Sunday. It’s actually been a very long time since I’ve been fruit picking of any type – although maybe I got my fill in 8th grade. (I packed blueberries for a summer at a farm for the whopping amount of $3.87 an hour – w00t!)It was humid in the fields, but the kids really had a good time. Lucy in particular only wanted to sit there and eat the strawberries right off the vine. (“Can we eat now? Can we eat now?”). It’s an organic farm so except for a little dirt, there wasn’t much to worry about as far as pesticides and the rest.

Connor also had fun – he brought his bug zoo box and tried to catch butterflies. No success that day, but we caught praying mantis babies on Monday, so that evens out. 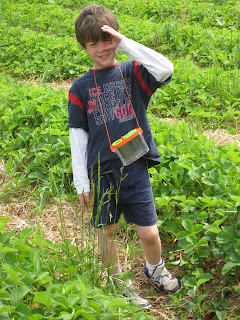 The farm itself (Great Country Farms) also has lots of other things for kids to do – petting zoos, gold panning (which actually involves buying a bag of dirt in which fossils, gems or arrowheads are stuffed, and then sluicing it through this little river thing), playground areas, slides, fishing, etc. All in all it was a very nice day.
GCF also has a winery and a country store, and we usually stock up when we go there. They’ve got all kinds of nice soaps and funky syrups and butter (apple butter?). This time around I bought a winged pig. It’s made out of weathered metal, but God knows where they got it from. There’s a lot of peeling paint so I suspect junkyards. There were quite a few to choose from – different sizes and animals – though wtf I’d do with a 6 foot metal sculpture of a rooster I have *NO* idea.
Winged pigs, of course, are an anomaly. My point being that I’m not sure if my ability to get pubbed is as close as that (Ha! When pigs fly!), but in the interest of snubbing fate, I decided to buy said pig and put it on my porch.  I don’t have a picture of it there, but after I bought it at the farm I wheeled it around in the stroller.  That’s how I roll, yo. 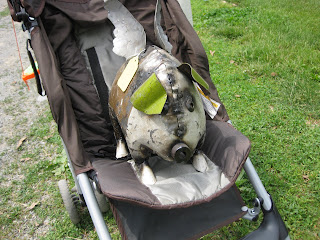 This entry was posted in Connor, Lucy, winged pigs. Bookmark the permalink.