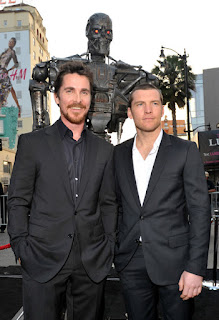 This is half Terminator 4 review and half rumination on how minor characters in one’s book can interfere in the telling of a good story. (Small spoilers ahead). I saw the movie on Saturday, and I have to say that despite the majority of the reviews, I liked it. Yes, there were many issues, but I still dug the concept and it’s *way* better than T3. (And T1 and T2 are probably still my fav movies of all time – tho it’s a toss up between those and Alien(s)).

One of the biggest issues with the T4 movie is that it couldn’t seem to figure out who it was supposed to be about. Suffice it to say, it really isn’t a John Connor movie, and from what I understand, JC was originally only supposed to be a minor character. The real “hero” character is that of Marcus Wright(Sam Worthington) and his journey of how he basically became the first T-800. It becomes one of those Man vs man type stories where he has to discover just what he is and if that human heart of his really is what gives him his humanity or if it’s something else. Decent enough and I think if they had left it that way, it would have been way more interesting. (There was the beginnings of a love interest as well, but it was never fully fleshed out and I just wasn’t buying it). Seeing Kyle Reece as a teenager was a hoot, and the guy playing him did a damn good job of channeling Michael Biehn. (*sighs* He’s like 50 now. 50???! *sob* I’m so damn old.)

But then Christian Bale got involved. Originally slated to play Marcus, he decided that John Connor would be a better fit for him. Of course, you can’t have an A-list actor reduced to a minor character, so what happened? They ended up rewriting a good deal of the story to give John a bigger role. Problem is that despite the few Easter Eggs tossed to the Terminator fans, neither story was very satisfying. Extra JC meant that MW’s story was watered down and JC sometimes ended up becoming a caricature of himself.

Still. Makes me wonder how that works in writing. What happens when your main character gets pushed aside? How do the “big” time writers make it work? I’ve seen it done where they dedicate an entire book to a particular character, but what happens when a previous “hero” decides to shove his or her way in? (or fans insist on it). Do you let them walk all over your story? Let it ride and see if anything better shows up? Put that side character back into the box?

I suppose it might be argued that if your side character can get pushed out of his/her own story then they might not actually deserve a story of their own. And of course, it works the other way too – sometimes a minor character can completely upstage and outclass the main “hero/heroine” to the point where they become more popular than the main characters themselves.

I’ve always found it rather fascinating how that works – how that one little walk-on character with the amusing banter or the funny clothes manages to steal the whole show. (Read – Lafayette in True Blood).

This entry was posted in characters, terminator, writing. Bookmark the permalink.

One Response to Those Pesky Side-Characters…