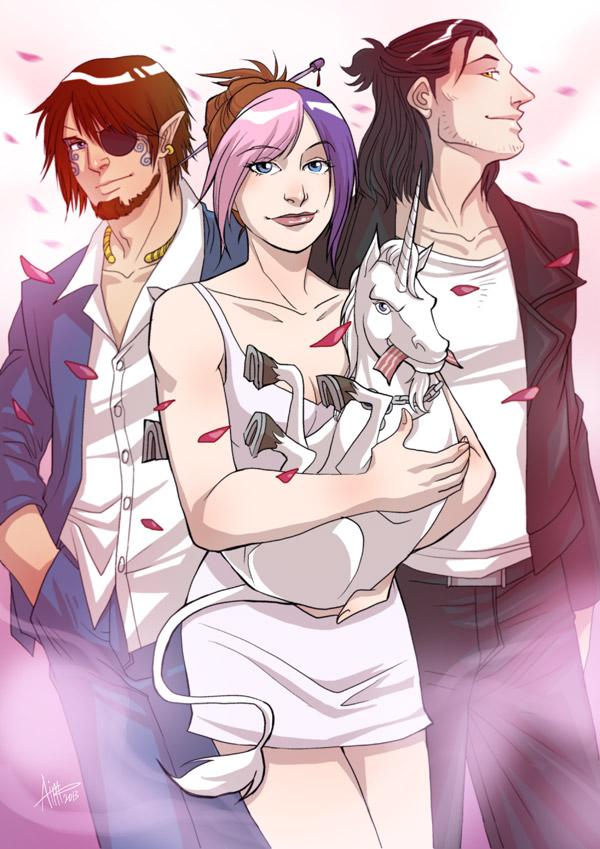 Or more to the point, I’m in the process of writing another Abby book. And while I did say I would do it for NaNo (and technically I am), I’m not exactly aiming for 50k in the month – it wouldn’t be enough anyway, so I’m just focusing on steady progress. I should have about 20-30k done by the end of the month and that’s not a bad start for a series I haven’t touched since 2012.

I’ve got an ambitious writing year lined up (for me, anyway) – I’m nearly finished with the draft for Magpie’s Flight, I’ve started Abby #4, and I’ve got a third, unrelated book started that I would also like to rough draft. (And probably at least 2 shorts, but we’ll see how that goes.)

I’ve been using a different writing strategy then I have in the past – namely I want multiple drafts to work on instead of writing and editing one at a time. I’ve also been writing in the early morning hours before work and it’s given me a really nice production boost. I no longer write on weekends, which gives me several days of unfettered access to whatever I want, guilt free. (Reading, anime, cleaning my house, whatever – from a balance perspective it has helped.)

But I will say it has taken me some time to get back into the groove of writing Abby and company. I reread the original series over the last few months – and while I found a few issues here or there, I could see where there needs to be a bit more to wrap things up, mostly involving the trio, and also Melanie’s unresolved violin/Nobu issues.  Abby #4 will take place shortly after the end of A Trace of Moonlight, so you won’t lose too much in the transfer.

Still, I’m not the same person I was when I started writing those stories – and I’m not sure I’ll be able to recapture some of the goofiness of the past, though I’m certainly trying. To be honest, I’m just getting the skeleton of the story down – sexytiems (and there will be at least one pretty smutty scene that I know of) and snark will probably come with the second pass. I’m still a panster, after all and the only thing I vaguely know is where this story *should* end  – but I honestly don’t know if it will happen the way I expect. But I never really do when I write these, so that’s part of the fun.

When will it be published? Eh. Probably some time in late 2019, probably ebook only. I’m hoping to have a working draft to send to my editor no later than March. I do want to finish up Magpie’s Flight first and hopefully the skeleton draft of the unnamed high fantasy, but we’ll see – a lot of it depends on my editor’s schedule and all that. Sometimes the best of intentions fall by the wayside of reality, but I will do my best.

Snippet. (very short – and it will most likely change – please excuse any typos and timeline inconsistencies and whatnot, it’s obviously not finished , ahem)

“…and then she rubbed her silky thighs over his chest, whickering softly. The End.” Phin’s hooves typed out the words in dainty fashion as he repeated the sentence aloud. “There now, first draft of The Girl of Horns and Bites is finished.”

I glanced up from my copy of Baby Bumps In The Night: Tips For the Preternaturally Pregnant with a sigh. “Sounds like a best seller. For Furries,” I muttered under my breath.

“Damn straight.” The unicorn adjusted his tiny spectacles and peered at the laptop screen. “And you know, I don’t think you even need that book you’re reading. After all, Ion was mortal at the time of conception, wasn’t he?”

“Sure.” I continued to sift through the pages, choosing not to linger over the chapter titled ‘What to Do When Your Baby Decides to Eat its Way Out.’ Blanching, I shut the book with a snap. “But I might not have been. After all, I was carrying some of his incubus powers then.”

Phineas paused, his mouth open for a moment and then he nodded. “Fair enough. Still a bit early though. You’re not even really showing.”

And I supposed that was sort of true. Maybe not to the outside world, but inside, things were definitely changing. I was just rounding that third month of what all the baby books indicated was the end of morning sickness and the beginning of something called the Golden Trimester or some such bullshit.

Nothing golden about it from what I could see. Just a never ending run of tightening clothes and sore boobs. And as of now, the morning sickness was less a morning thing and more of a whenever I stepped in the kitchen thing. I couldn’t even look at the enchanted fridge without dry heaving.

To be fair, it had done a good job at trying to produce foods to soothe my tattered stomach, but crackers not withstanding, the not being able to eat bacon thing was breaking my heart.

“I don’t think I’m looking for information about giving birth so much as I am about my living situation,” I said finally, stretching out my legs. “It’s not like Talivar is shy about sending elvish midwives to knock at my door every couple of weeks.”

And the Faerie prince wasn’t.

King, I correct myself. King of the Unseelie Court, even. The fact that I was technically still married to him meant that my unborn was potentially the heir to his throne, a thought that was beyond frightening.

And not that I hadn’t tried to get out of the marriage before – the handfasting was only supposed to last the traditional year and a day, and I’d gone into it with that understanding. But getting pregnant during that time sealed the deal, so to speak.

No take-backs when it came to Faerie nuptials, I guess.

The fact that the baby’s father was an incubus just cluttered things up even further. “Mmmph. Somehow I doubt there’s a chapter called ‘What To Do When Your Baby Daddy Is A Sex Demon, But Your Husband Is Faerie Royalty. Oh, And You Love Both of Them.’” I snorted. “Maybe I should write it.”

“Maybe you should,” Ion purred in agreement from the bedroom, his ridiculously handsome face peering around the doorway.

He ducked easily when I lobbed the book at him, snagging the tome from its haphazard route toward his head and placing it on the coffee table beside the phone. I gestured rudely. “This is all your fault, you know.”

“Oh, I seem to recall you were pretty heavily involved at the time.” He pursed his mouth as though remembering. “Besides I hear the second trimester is when a woman’s sex drive increases. I’m looking forward to…eating well.”

Well, there you go.

Incidentally, I’m going to need a title – so I’ll take suggestions down below if you have any to offer.

Otherwise, have a good holiday if you celebrate Thanksgiving and safe travels. 🙂