Unicorn Fezzes and Other Assorted Weirdness

So first off, I’m really bad at con recaps. Usually because by the time I get around to thinking about writing them, I’ve forgotten everything but the highlights.

Which I think tends to happen at most cons in general – you meet so many people and have so many conversations and things happen and then it’s all a big blur anyway.

That being said as a first time attendee to Necon, I really enjoyed it. I’m mostly an introvert and I did do a bit of wallflowering for the first couple of days. Con sizes tend to have interesting dynamics – the really big ones are overwhelming because there are SO many people, but on the other hand, it’s really easy to sort of blend in and do your own thing. You lose that ability to hide with the smaller cons, plus in this case, it’s the first time I’ve been to a con where everyone seemed like part of an extended family. Sometimes it feels intrusive to wander into that, even if I actually did know a number of people attending.

(I did have a fatigue flare-up for a good chunk of Friday, but that’s another post – I’ve got some thoughts on Spoonie writers that I think might be worth discussing later…)

At any rate, it wasn’t until the second evening and a late night round of Cards Against Humanity that I actually felt like I was getting into the groove. And then my panel the next morning. Never mind that I have no idea HOW I got onto a panel, but in either case, it’s was nice to be included as a first-timer.

Which brings me to the panel itself – it was a typical sort, and the topic was about writing a series. Which given that my first series/trilogy has been out for a while was a little awkward, since I don’t really talk about it that much these days. My initial goal had really been to talk about my NEW series, but that was never brought up – there just wasn’t time and I was specifically asked about Abby.

And while I haven’t been to any cons for quite some time – I haven’t talked about the Abby books at ALL. Aside from reader questions on Facebook, or whatever – it hasn’t really been much of a point of discussion. In some ways it’s a bit sad because I’ve moved on from them – though I will say some of the topics of the panel really made me miss it. The Abby books were fun – silly, smutty, ridiculous and amusing, even with the more tragic bits worked in. (And yeah, now I really want to go back – the story isn’t completely over and I think there’s at least one more grand adventure awaiting.)

But Necon is more of a horror-writers con – so my books probably hadn’t been on anyone’s radar, really. (Unlike all my previous RWA/RT/etc type cons.) But in either case, it was nice to revisit some of the reasons as to what I wrote and why I wrote it.

Ah, but then I had to open my mouth about that one particular character that everyone 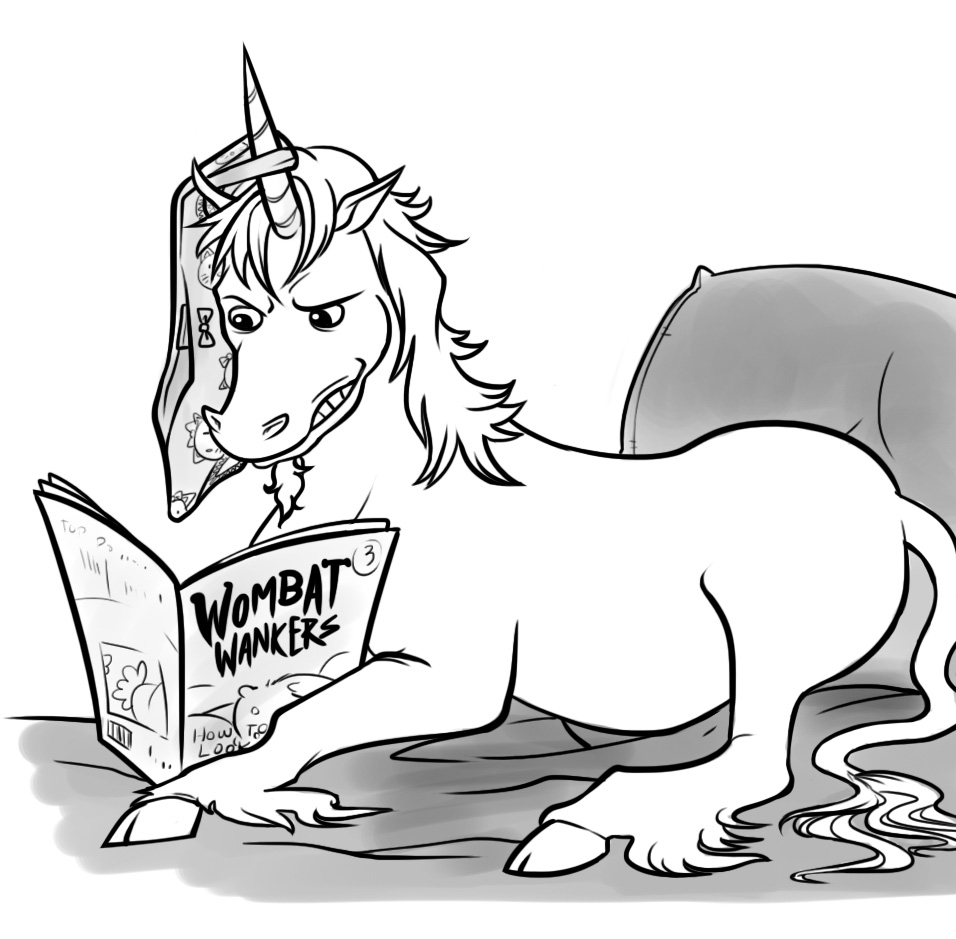 either loves or detests.

Which is Phin, of course.

And then suddenly I remember I’m on a panel with Craig Shaw Gardner – who I started reading when I was like 11 years old and Jesus Christ now I’m next to him talking about the sexual proclivities of unicorns.

But then, you know. You gotta own that shit. Because of course I figured it would blow over at that point since it’s probably not the typical sort of horror-con topic. Everyone would most likely just nod and go “Ah. You’re that sort of writer.” And I would be forever shunned into the pervy bestiality corner.

I’m not sure what sort of impression I’d hoped to leave at Necon, but I guess I made enough of one to warrant awarding me a coveted Necon fez (with a unicorn patch on it, no less. ) I have no idea whose idea it was and I’m pretty sure I don’t WANT to know. But, uh – THANK YOU.

I probably didn’t help things much by cross stitching a Whatever Bitch unicorn while I was there as a gift for a fellow writer. (Should I go back next year, I plan on making several projects ahead of time and putting them into the charity auction.)

At any rate, the fez is on the grand piano as pictured above, next to the whiskey-guzzling Phin. As you do.

Is there more? Of course there is, but that’s about all I can manage for the moment – I made a ton of new friends while I was there, so thanks to everyone who made me feel welcome and I hope to be back next year. 🙂