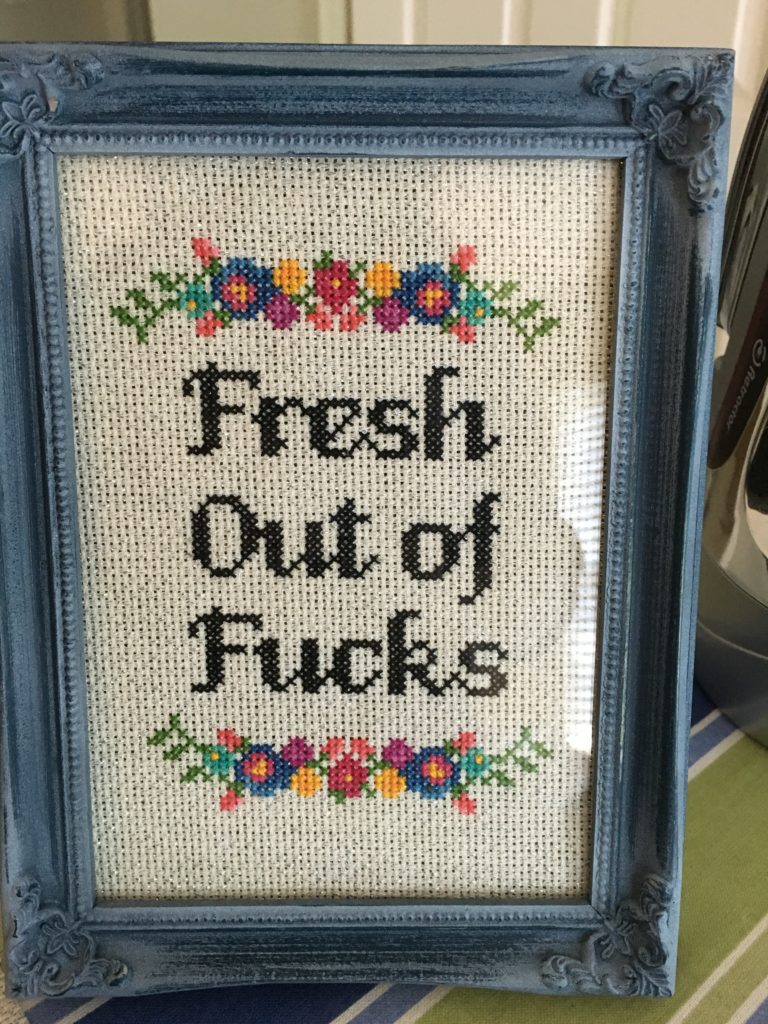 Just doing a little end of year post – obviously it’s not a real retrospective. Much of the year got derailed by needing that third back surgery, so there was a lot of time for introspection. I have a tendency to shut-in when I’m in that much pain – not sure if that’s good or bad, but usually long periods of radio silence from me are due to that, though I’m working my way back into the sunlight, as they say.

In the meantime, I spent a fair amount of time sewing – it was one of the few distractions I could do from the only chair that *didn’t* make me want to throw myself out the window.

Pain being what it is, I stitched a number of subversive patterns…and then gave them all away.  I didn’t sew a single thing for myself at all – I suspect that’s because making them for other people allowed me to do it guilt free. And it’s not that sewing is a guilty pleasure exactly, it’s just that I tend to come down on myself pretty hard when I’m not doing something productive, whatever that is.

On the other hand, sewing is one of those things that really does help when I’m trying to 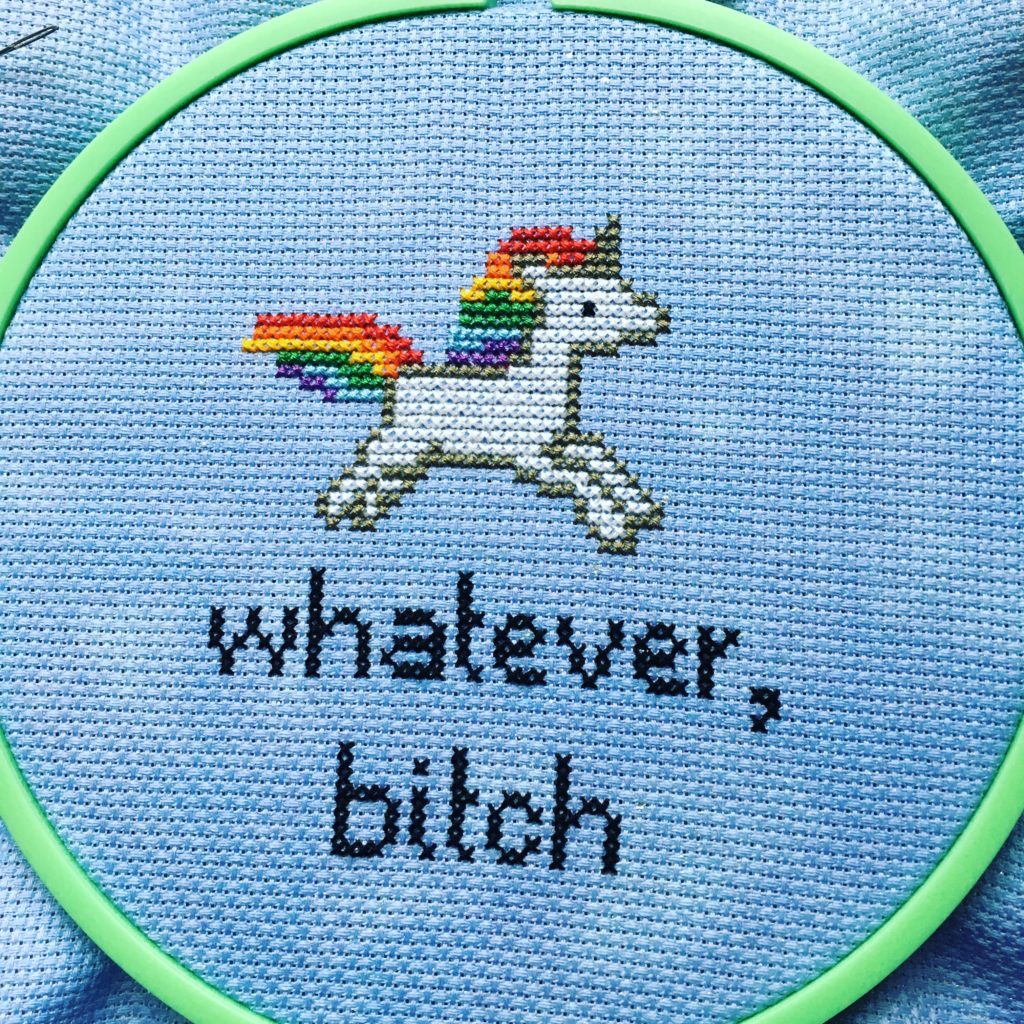 plot a bit simply because it keeps my hands occupied but allows my brain to wander. Once I’ve got a rhythm going, it can be hours before I really notice just how long I’ve been working. (Which has lead to a slightly numb hand for a while, but whatevs.)

Some of these pictures are really bad, btw and I apologize, but I’ll leave links at the bottom to where you can actually buy the patterns.

I made four of these bitch unicorns – they’re fast  and fun. I would have liked to made a few more but I ran out of the specialty tie-dye/sparkle aida I ordered for it. I’ve got additional cloth on the way, because I really do want to make a few more of them, just not sure about my time this year. 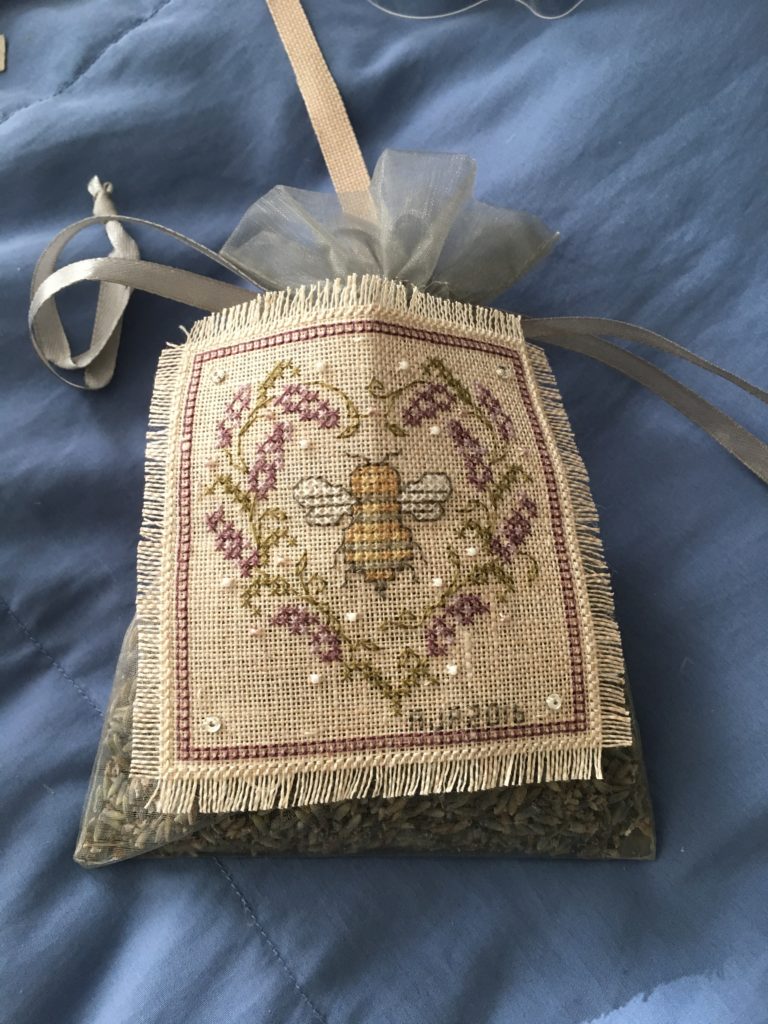 My first real attempt on linen – I actually started this while *at* the hospital during my last surgery.

I’ve avoided linen like crazy in the past, but I really liked this pattern and all the funky stitches and beading and it was fairly small so I figured I’d give it a shot.

(Turns out I actually need spectacles on top of my contacts to actually make it work since I’m old or something.)

It’s been attached to a sachet full of dried lavender and amethyst crystals.

But, hey, doing a little project like that led me straight into a bigger linen project… 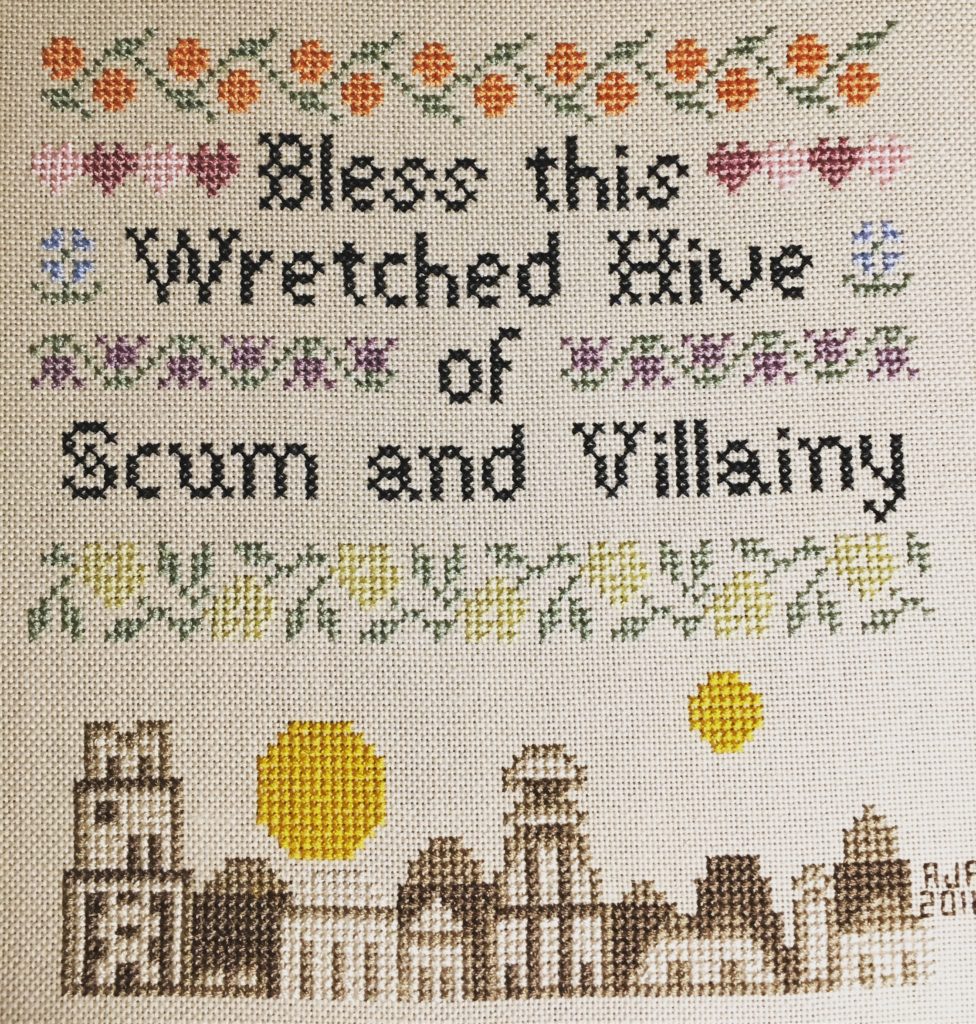 Obviously it’s a Star Wars reference, but made it for a friend who finally got a real place of her own after many years, and I figured it was well worth the extra effort to do it on the evenweave.

(I can see the appeal behind using linen/evenweave – it has a more professional feel to it, I guess – but I suspect aida is still going to be my go-to, since it takes me 3 times as long to do a project on the linen…)

Another housewarming gift of sorts. Not much else to really say about this one except it 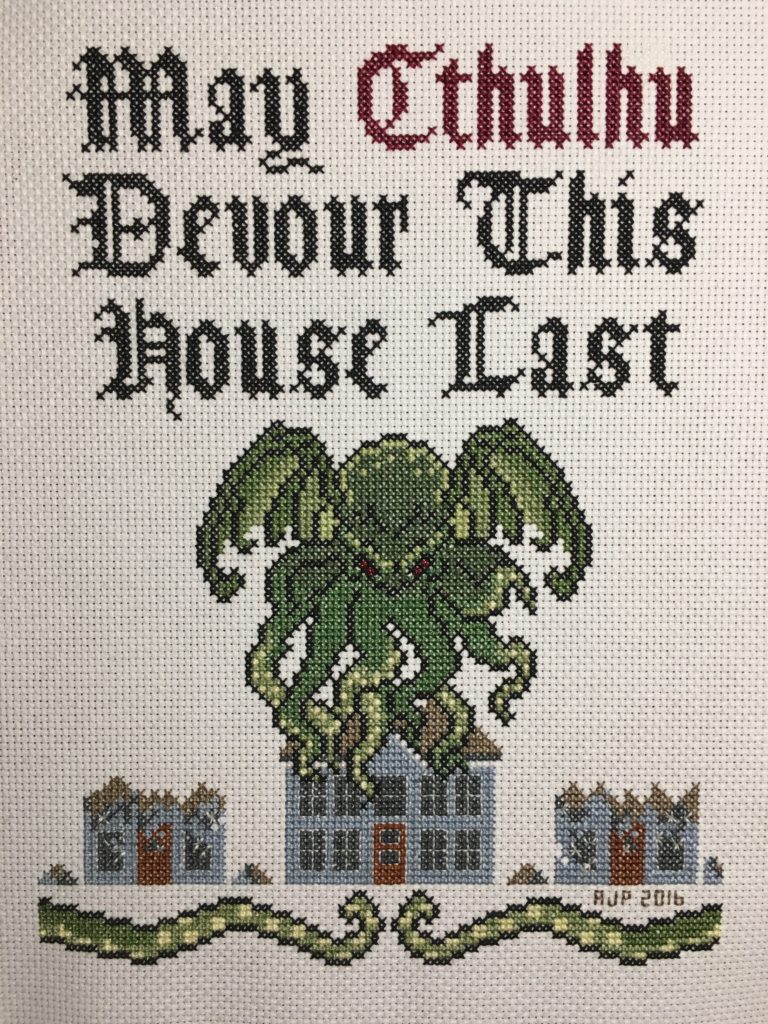 was a lot larger than I anticipated, ( 11 x 7 I think…) but there is something so MUCH FUN about sewing Cthulu.

(I dunno – maybe I should start a side business sewing this kind of stuff for authors or readers or something – if I had time I’d make my own designs, but at this point, I really don’t.)

And another piece – this was a straight 5 x 7, so not massive, but very, very dense as far as the stitching goes. No real white space, just some half stitches in the upper part and I 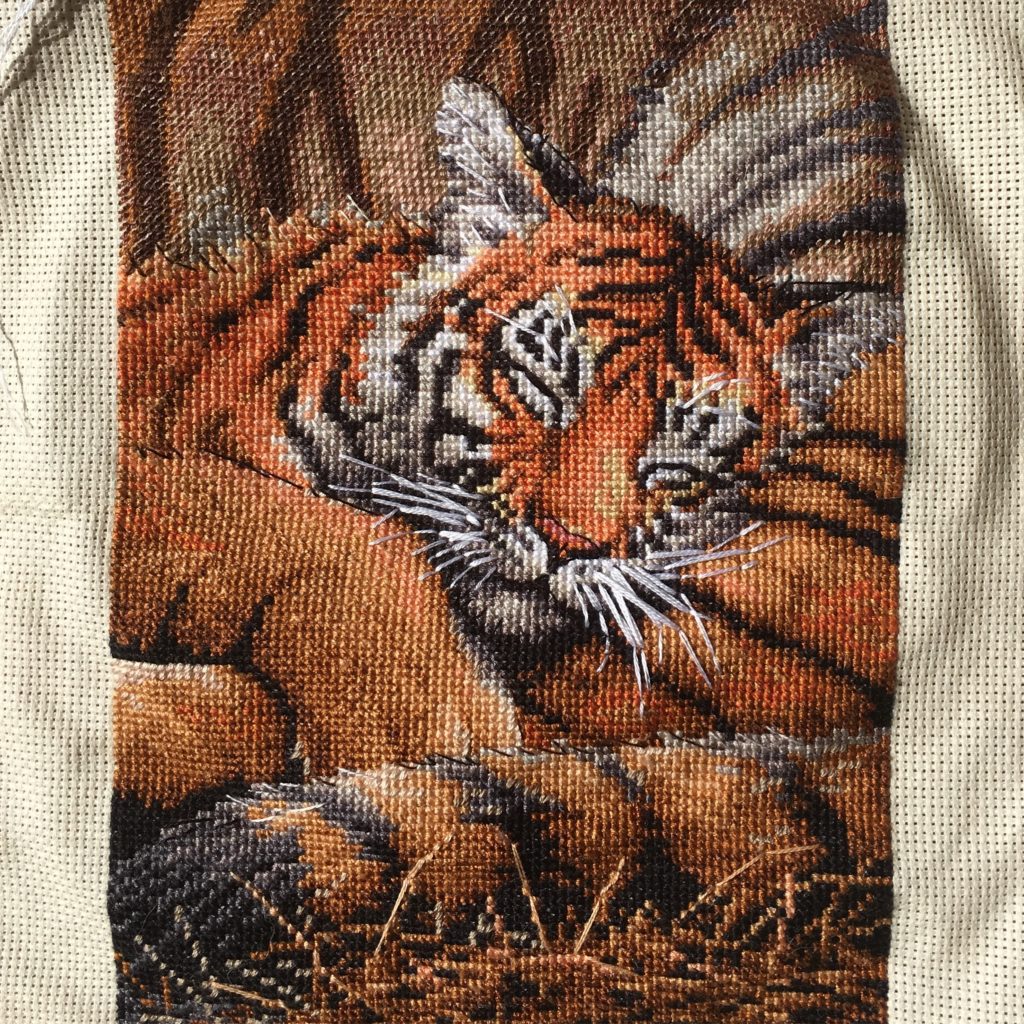 cheated a bit on some of the embroidery because I ran out of steam toward the end.

Plus anything with gradients of similar colors can be a bit fatiguing to the eyes – lots of browns and oranges and grey in here – looks absolutely stunning in person though. 🙂

Overall it was a super productive year in terms of crafting – I also discovered those Q-snap frames which were a complete lifesaver when it came to just having to deal the with the weight of holding something for 2 – 4 hours at a time. (I have a ton of wooden scroll wheels, but I can’t use them anymore, thanks Fibro.) The Q-snaps were light, which is nice, but I have a bit of hesitation when it comes to using them on larger projects as they seem to have a tendency to bleach out the cloth and that could be troublesome if I can’t cut it away. We’ll see.

At any rate, here are the links to the above projects should you wish to try them out yourself:

Fresh Out of Fucks

Except for maybe a few smaller projects this year, I’ve sorta blown my load when it comes to the cross stitch at this point – I haven’t sewn like this in YEARS – but now that I’m starting to feel better post op and all that, I’ve got to buckle down and focus on my own work for a bit. (Even my own myriad sewing projects – I always pick the giant complicated patterns that would take years even I wasn’t doing ten other things.)

So here’s to a Happy New Year and all that jazz and let’s hope things are better for everyone, all the way around, in 2017.

This entry was posted in blog and tagged cross-stitch, happy new year, other projects, sewing. Bookmark the permalink.