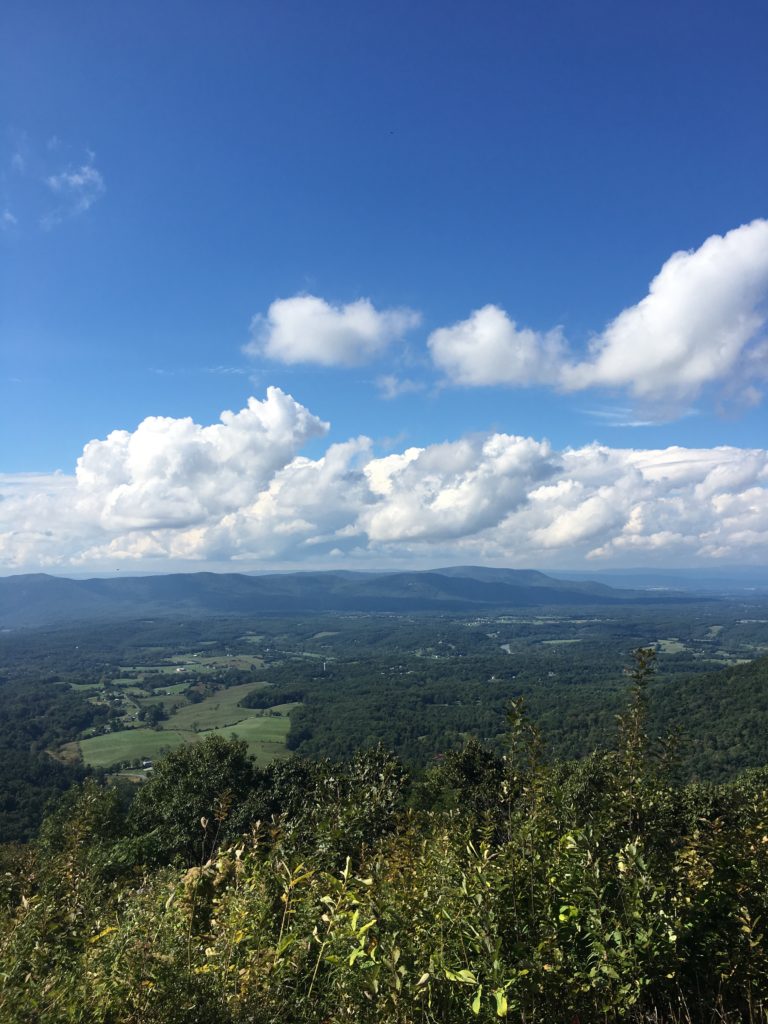 I spent most of Sunday out and about on the Skyline Drive portion of Shenandoah National Park. Partially because it was raining the last several days and everyone had a touch of cabin fever, but also I simply needed to get out of the house.

It wasn’t a completely spontaneous trip – we’d mentioned it off and on as something to do with the kids if I was up to it, but since our Friday evening got completely washed out due to flooding in Old Town Alexandria, I figured we would at least drive out there and attempt a simple hike.

At any rate, the other reason I needed to get out of the house and into the wild was to recalibrate some. I had a fairly productive weekend- making words on the self-pub edits, sussing out places to send out a short story I’ve recently written, catching up on the Dishonored DLC before the sequel comes out. (I’ve been playing the whole game without 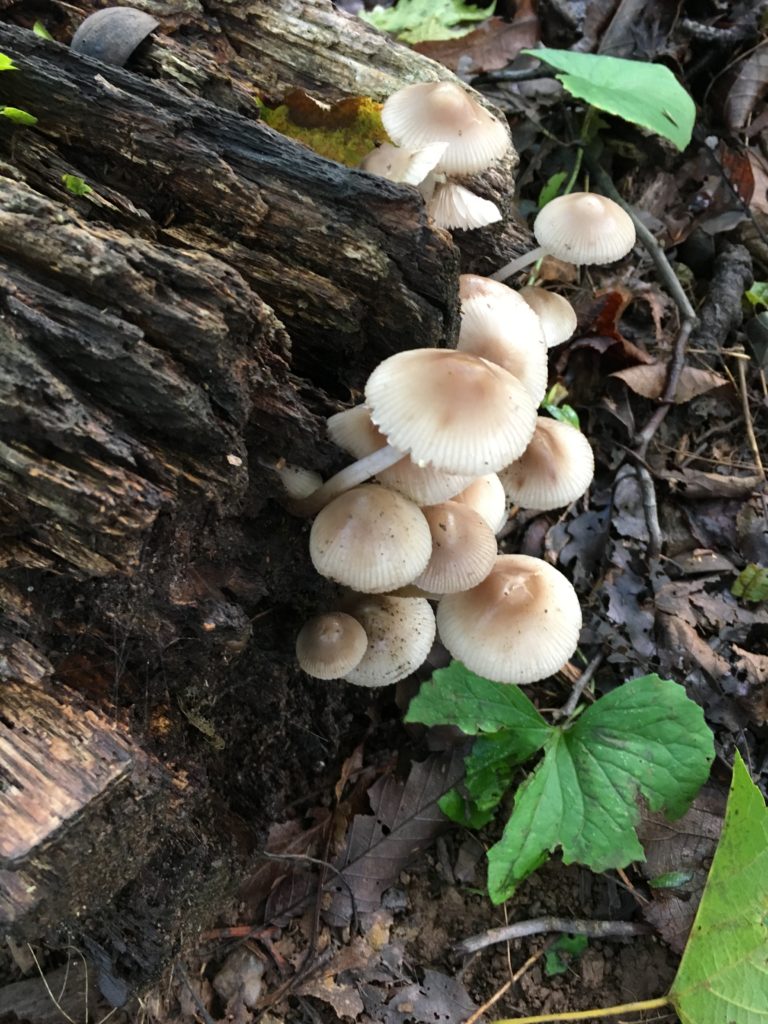 killing anyone or being seen – I like an extra challenge, and frankly it’s nice to have a game where I don’t HAVE to kill anyone.)

But even so, in talking to a friend about the markets I wanted to sub this latest short to, I ran across one of the myriad Kickstarter anthologies out there only to find a Big Name Author will have a story in it…that is exactly like mine. (And it’s a pretty esoteric subject, so I have to admit it’s a tad frustrating.)

Not that it hasn’t happened before – and I’m sure it will happen again. Tropes are tropes for a reason and there are a finite number of archetypes so this sort of thing is bound to happen. (And really, if you’re Hollywood, you spend your time remaking movies that were popular/successful to cash in on that. I mean did we REALLY need a Point Break remake?  I think a lot of the reason some movies were successful is because they were products of their time – they lose something when they’re modernized. You can’t really go home again, as they say.) 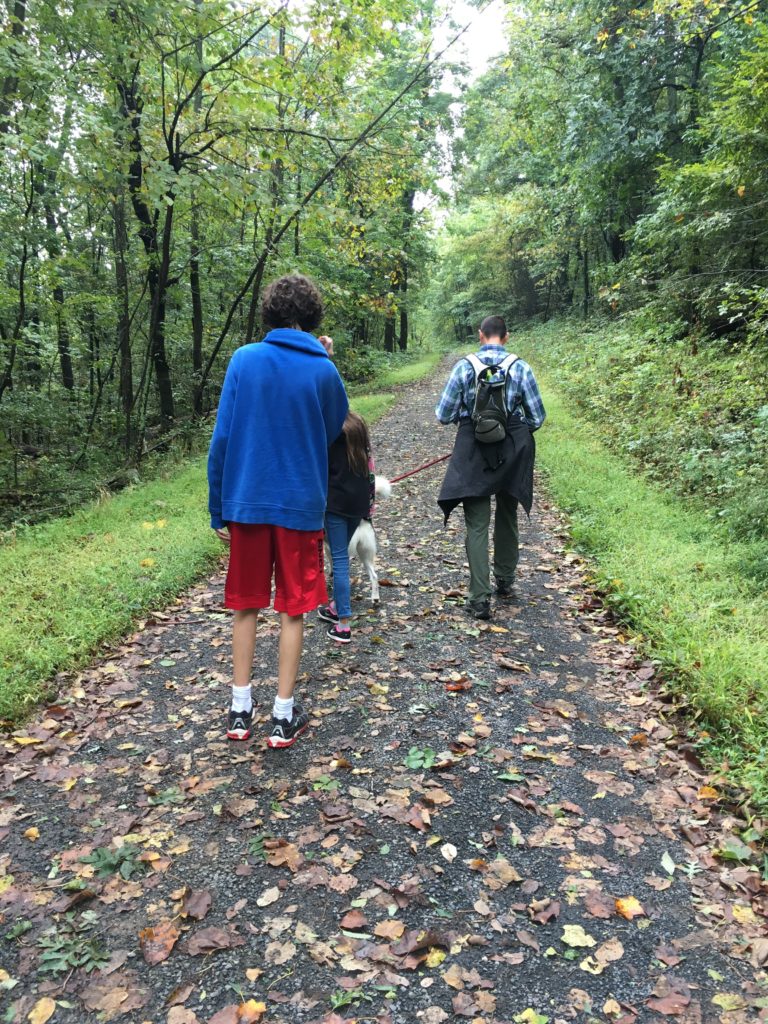 At any rate, I was in a bit of a funk trying to figure out what to do with this story. I may sit on it for a while, or I may send it out anyway – but we shall see.

So, hiking. And just spending the day NOT thinking about writing. (Not that I didn’t bring a notebook along. That always happens, even if I don’t use it.)

The back still isn’t perfect, but I was smarter about things this time around. We started out on an easy fire road that was relatively short to see how I’d handle it. I brought my cane and by the time we ended up on a rocky footpath heading up a ridge, I was rather grateful I had it. I’m still not quite there yet, but from a balance perspective, the cane was a definite help.

My right SI joint is unfortunately out and being obnoxious, but it was already that way 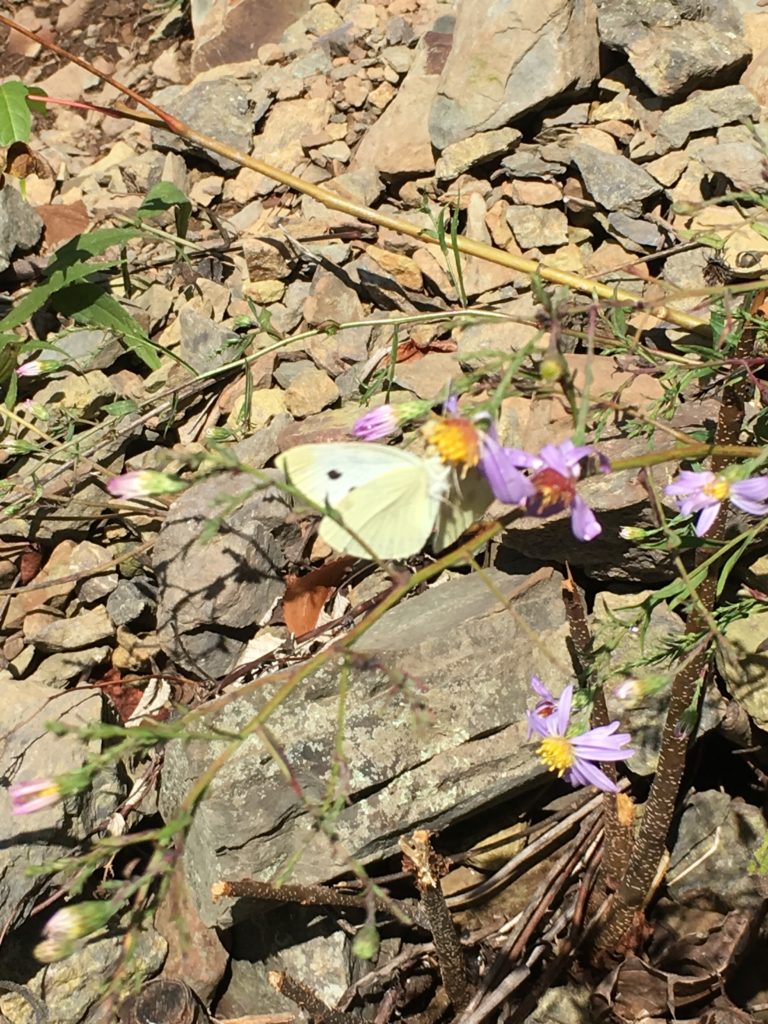 before the hike, and walking for three-odd hours helped loosen it up a bit. I see my surgeon at the end of the week – with any luck I’ll be cleared for some PT and some harder chiropractics. Loose joints means I need to be cranked pretty hard to put the joints back in and my chiro (wisely) isn’t touching me like that until I get the okay. So, there we are.

But the hike itself was very good. By the time we were done, we’d gone about 3.5 miles through some moderate territory (and for me, that was a miracle.)

This particular hike also meant a very tired puppy by the end.  And in fact, we debated even bringing her as they’d just reopened it to dogs as a bear apparently killed a dog there rather recently, so you know – there’s always that chance. And of course explaining to the kids that running away is NOT the thing to do when confronted with a black bear. I have NO idea what Maggie would do. Pretty sure I don’t want to find out. Yes, we were armed, but honestly the best policy for avoiding bears is to make enough noise along the way that they can avoid YOU. 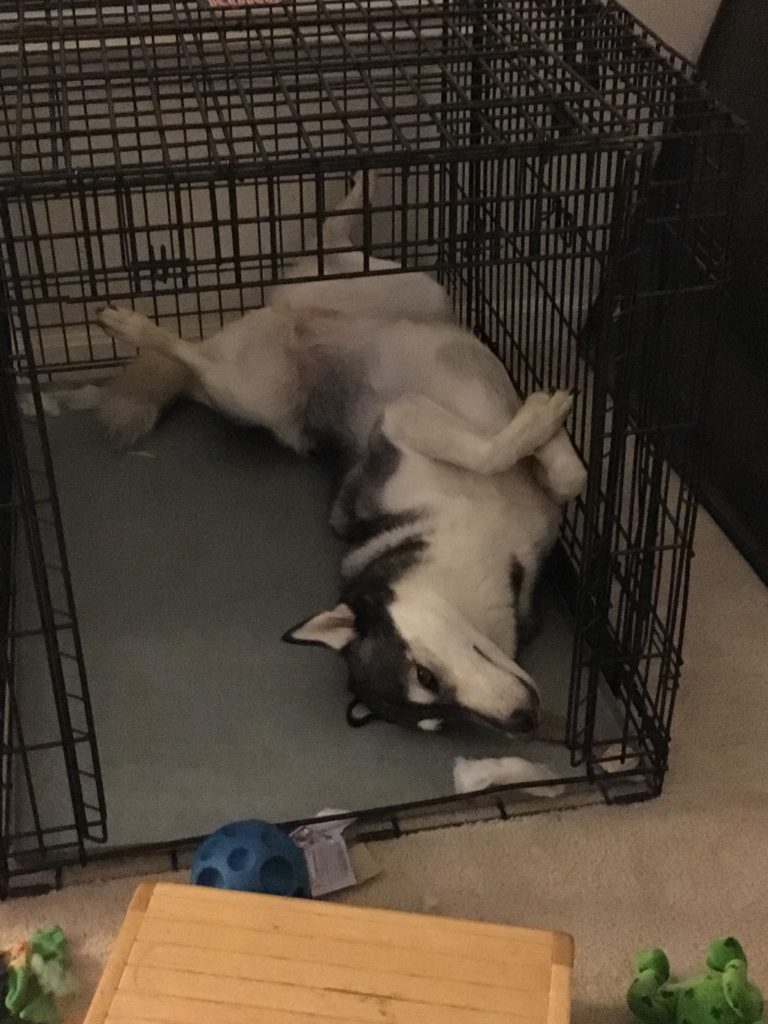 At any rate, by the time we’d gotten home and showered and ordered a massive pile of Chinese food, I was left in a rather blissful state of quiet. I decided to leave it that way and catch up on crap TV and read some manga. It’s rare my brain stops thinking and judging and fretting, so I figured it was best to take advantage of it while I could.

<– Notice a certain puppy who has crated herself. Girlfriend drank a ton of water when she got home and then didn’t move for about five hours or so after that. Much like my brain.

They say bored dogs are destructive dogs – I suspect that’s probably true of the creative mind as well. Not that my mind is “bored” exactly – but with too much energy comes the urge to nitpick myself into oblivion. With a tired and sore body, I was left with some desperately needed clarity. With any luck, as my back improves, I’ll be able to take advantage of that and try to hit the backwoods with a little more regularity.

In the meantime, I’ve got another short story or two to finish up. Hopefully before someone else beats me to it. 🙂

This entry was posted in blog and tagged clarity, hiking, make my brain stop, outside. Bookmark the permalink.