I seem to have become a bit of a collector of Tarot and Oracle cards over the years – as a writing tool they can be helpful when it comes to determining a character issue or a plot point (especially if you are a panster like me – sometimes a nudge in the psyche can open up a whole new direction.)

More often than not though, I tend to buy card decks because I really like the pictures. Which may be sort of odd to admit, but a lot of times I find an artist with many lovely prints and while I would like to be able to buy them all, sometimes that just isn’t a possibility – so when I find out there’s a card deck involved? Mine.

I actually *did* purchase a print of this lovely image by Julia Jeffrey of Elen of the Ways, though – and then bought the deck that went with it afterwards.  (You can check out this print and ton of others, as well as the Tarot deck on her Etsy shop here...)

Now, I’ve got a few tried and true decks – the Shadowscapes deck, the Robin Wood deck, the Romani Tarot and a few others, though I don’t really read Tarot – at least not for myself, but again, as sources of inspiration they can be very helpful. Over the last few months I’ve stumbled across a few more so I thought I’d mention them here.

Tarot of the Hidden Realm – as noted, these are the cards by Julia Jeffrey. Each card is available as a print as far as I can tell, and they are really lovely. They stick to the Major/Minor Arcana, though they do make substitutions for the traditional Rider-Waite decks, e.g. Shadowdancer instead of The Devil, for example, but the images make a lot of sense as far as the meanings go.

I actually like it when decks change it up some – I tend to focus more on the traditional meanings and this forces me to take a closer look at what’s being represented. 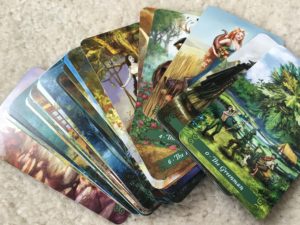 The Green Witch Tarot – I’ll be honest, I bought these on accident. They are still traditional Rider-Waite but they have a few substitutions and the overall deck has more of a Wiccan flare, e.g. (“Harm None”, etc.) as opposed to full on witchcraft.

That said, they are still very beautiful – the art is by Kiri Østergaard Leonard – click on the link for a closer look at her lovely work. 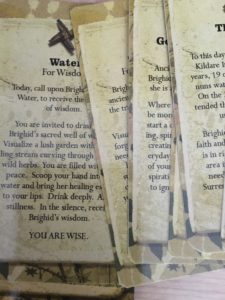 The Way of Brighid Oracle Cards – No pictures here, but as Brighid is a Celtic goddess/Irish saint, the focus is on traditional signs and symbols of Her.

Not a Tarot deck, there are 33 cards here and I find them more useful when simply drawing a card here or there when I need additional clarification on something. I do wish there were pictures, though – I don’t always like directly interpreted meanings, but these are still quite nice.

They are created by Tonja Reichley and you can find them on her Esty. 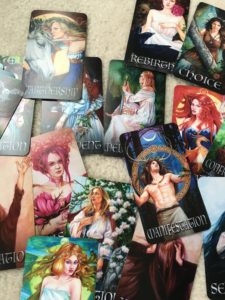 The Jane Starr Weils Oracle – These are a lot of fun. Again, love her artwork, can’t afford all her prints, but this oracle deck has a lot of my favorites. It’s similar to a Tarot deck, though it adds another suite, that of Spirit, but I don’t really use it that way.

Like the Brighid cards, I find it more useful to simply draw a single card for clarification (and with the basic meaning written right on the front, it isn’t too hard to figure out what’s going on.) 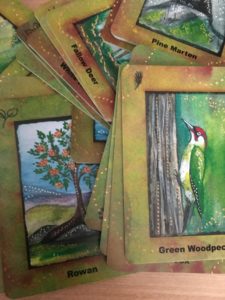 The Oracle of the Antlered Road – This is a very new deck, only out for a month or so and focused on the goddess Elen of the Ways.

It is by Samantha Marks and Suzi Edwards Goose and the deck features some really delightful art focusing on plants and animals. (The deck does come with a book to help with interpretation as well as a layout cloth of sorts).

As far as I know these decks are fairly limited, so if you want one you’ll have to use the Facebook page to order.

Aside from these five, I’ve been playing around with some iPhone apps – even though I’ve got (2!) copies of the ShadowScapes deck by Stephanie Law, I’ve got it on the iPhone too, as well as the Druid Animal Oracle Deck(which is also helpful because it includes both the Animal and Plant decks. The Plant deck is out of print, unfortunately, but the app is quite nice. ) 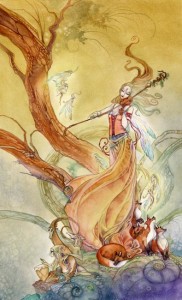 And speaking of ShadowScapes –  a little shout out to Stephanie  – she’s got a kickstarter going on right now for new and fabulous art book, so go check it out. (There are higher tiers for original art of hers, so if that’s something you’ve wanted, here’s your chance.) 🙂

This entry was posted in blog and tagged oracle cards, tarot, writing tools. Bookmark the permalink.