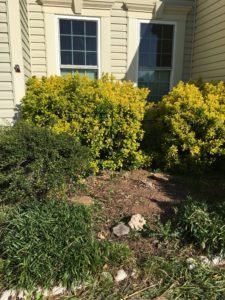 Not really a secret garden.

More like “how much stuff can I do before my HOA slaps me on the wrist?” Incidentally, I really hate my HOA. For the ridiculous monthly fee I have to pay, they sure don’t seem to do much other than drive around and tell people how they’re “doing it wrong.”

I mean, I get that it’s better if people cut their grass on a regular basis and don’t have cars sitting on blocks in their yards, but we’ll get write ups because we left our garbage can at the end of the drive way an hour too long.

At any rate, I’ve always been a little ambivalent about the little garden we do have – it was there when we moved in, and it’s mostly just shrubs of various sorts, several of which appear to be old and somewhat dying. But I’ve been working from home for several months now due to back issues, so I see the garden a lot and figure it’s probably worth making a bit of a change. That and we started getting nasty-grams from the postman about being unable to deliver mail “because bees.” 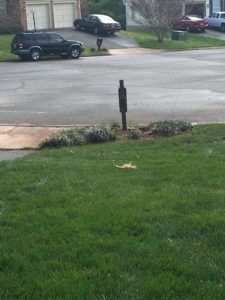 and while I don’t think there were any actual nests in there, even I was starting to not want to put my hand in the mailbox to get the mail due to the swarms of small stinging insects. So we had them removed – to be honest, I’m not a big fan of removing healthy bushes, but I’m less a fan of soaking said bushes in poison, so removal it was.

It looks a bit empty down there at the moment, but I did throw some mulch down on it this weekend and I’m hoping to pick up some smaller flowers soon to plant down there. Which probably won’t do much for the mailman and bees relationship, but if they’re not overtaking the top of the mailbox, it should be okay.

Which leads us to the rest of the garden in the front of the house – ideally I want to put a bench in that empty space, remove some of those dying bushes, trim back the ones that look halfway decent and plant some actual flowers. But I’m pretty sure we’ll get written up for the bench – in truth the rules say we aren’t allowed any decorative items in the front yard – no pots, no benches, no bird feeders, no NOTHING.  I can’t even plant a vegetable garden in the backyard without permission. (Which is Lucy’s next project – we’ll start with strawberries and see where it takes us, I guess…) 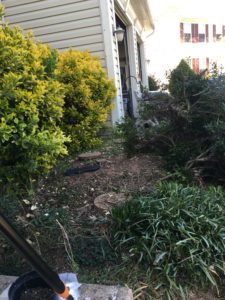 We cut down some of those bushes yesterday though – stump removal is next, though I’m not sure if we want to do it ourselves or just hire someone to come do it super quick. Patience isn’t a virtue of mine, but I also don’t like paying for stuff we can do ourselves. (And by we, I mean Dan – my back doesn’t allow me to do a lot of heavy stuff like this. Drag a bag of mulch around, sure, dig up a stump, no.)

<– We still have to do something with all those shrub bits. Compost probably…

I bought a little trellis in the meantime – it should come sometime this week, and I’ll plant something that grows up and put it between the windows. (At the moment it’s just research as to what can handle being in full, hot sun nearly all day and not die, aside from a cactus.) I did buy a little fountain too. I’ll probably get busted for it, but it looks a bit like a planter, so maybe if I hide it from the road behind another bush I’ll manage to get away with it.

In the meantime, Apple Betty is continuing to grow. (This is a much older picture of her.) I 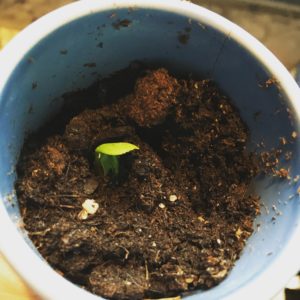 found Apple Betty sprouting inside an apple I cut open and about a week later, I found Apple Bob who is now planted beside her and starting to sprout as well. I’ll be moving them to larger pots shortly – I have no idea how to grow apple trees, but I do know you need at least two for pollination, so that part is covered. As far as grafting a scion branch or whatnot, I suppose I’ll look into that a bit later, but to be honest I don’t really care. I just like the idea of growing apple trees, really.

Plus there is something a bit omen-like about it, considering I’ve just gone on submission with a new book, and I rather enjoy the metaphoric aspect of it all.

*crossing fingers and all that*

This entry was posted in blog and tagged apple betty, gardening, on submission, plants. Bookmark the permalink.