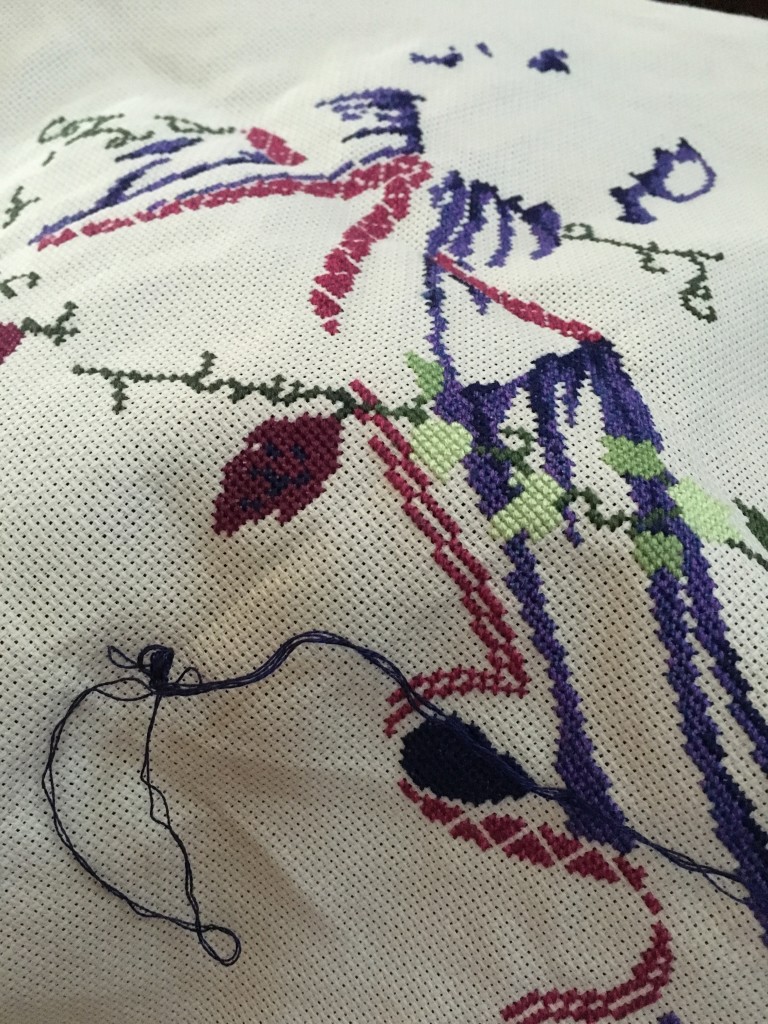 I’ve been picking up my sewing in the evenings over the last week or so.

Part of this is because I so rarely seem to find time do it. Since I’m waiting on feedback from my agent, I decided a few days of guilt-free crafting was deserved.

As hobbies go, it’s definitely one that doesn’t feel worth it unless I have at least a solid hour or more – it’s very frustrating to get everything set up and finally get into that rhythm only to be interrupted 15 minutes later.

(And don’t get me started on “distractions” like the TV – as background noise, it’s fine, but if I’m actually trying to watch it, it becomes a disaster – lots of counting mistakes when I’m not paying attention to where I am in the pattern. There is nothing more heartbreaking than getting 2/3 through a big sewing project only to realize you’re off by a few lines. It may not sound like a big deal,  but it is – at least to me. )

Of course, even assuming I have an empty house and no TV, there are always going to be things that cause delays. I’ve had needles snap between my fingers, missing thread, ripped patterns – you  name it.

And no matter how careful you are, thread always gets tangled or knotted. Sometimes it even breaks mid-stitch. Sometimes you can prevent it by letting the needle dangle every once in a while, but sometimes you end up with a strand that just wants to be an asshole.

I was working with such a piece the other night. I don’t know if it was the color (sometimes it feels like certain dyes seem to create more issues, but I’m not sure why) or simply that particular piece, but about every other minute it was knotting up something awful. After you’ve been stitching a while you do tend to recognize the pattern of knots – some you can simply pull out with a quick tug, some require a bit more care – and sometimes all hope is lost and all you can do is cut it and start over with a fresh piece.

Sometimes I cheat and just leave the knotted bits on the back end and keep going. It’s a bit of a no-no in cross-stitching. The theory is that the back should look just as good as the front, but I don’t have time for that sort of nonsense. The purist in me should but like a lot of creative things, most people only ever see the results anyway. (If someone wishes to dismantle my framed work and point and laugh at the knots, well, more power to them I guess.)

I enjoy sewing simply because it gives my hands something to do, but still leaves my mind free to wander. I tend to brainstorm a lot when I’m working, particularly when I do hit that rhythm of needle up, needle down. It’s rather soothing, to be honest.

At any rate, I’ve been thinking over a lot of those edits – I’m not sure the writer edit brain ever really shuts down. I made a LOT of changes to this manuscript – I’d say I rewrote about 1/3 of the book overall, but one of the perils of being a panster is loose plot threads – and I had a ton.

Sometimes ideas that sounded good at the time I threw them into a paragraph end up not making much sense later on. Or they aren’t needed, or they might make more sense in a later book or whatever. With this last pass of edits I came to the realization that maybe what I had was only half a book. Not in length – It was over 140k when I started the edits, and I cut it down to 125k, so it wasn’t about the word count so much as some of the plot threads not being fleshed out enough.

So that meant a lot of sorting. Or untangling, if you will – figuring out which threads were redundant or maybe needed a better details. Or snipped and moved to a a different part of the story. Or just removing them all together.

It wasn’t easy – and I know there are still some places that need smoothing out. I did have a couple of ah ha moments, though – odd how some things really don’t come together until you’re doing that final read-through and suddenly the lightbulb goes off. Add a couple of lines and everything falls into place.

Of course, ask me that again next week when I’ve gotten that feedback and I probably won’t be so sublime about it. In the meantime, I’ve got some needles to thread. ^_^

This entry was posted in blog and tagged cross-stitch, editing. Bookmark the permalink.