Waiting on Something Good 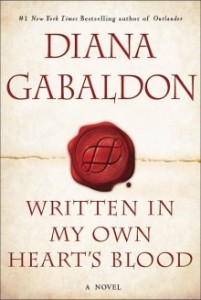 I don’t really do book reviews – mostly because I don’t have time, but since I read this one when I was on vacation and the Outlander series has some special meaning for me, I figured why not?  (No spoilers, though…)

And to back story that – when I was in college (or possibly high school, I can’t remember), my mom insisted I needed to read Outlander. Which was sort of odd for her – we didn’t generally read the same types of books – to be honest, the only time we really crossed paths was the Outlander series…and Kushiel’s Dart (which surprised both of us when she actually took my recommendation…and really  liked it. Even though she wasn’t a SF/F reader, KD became the gateway to a few other series she enjoyed, notably the Robin Hobb Assassin books.

At any rate, I sat on Outlander for a few days, not really being inclined to read anything that didn’t advertise itself as purely fantasy. (And Outlander was considered to be romance at that point, which wasn’t my chosen genre.) But one evening at the beach, I started to read it…and proceeded to read all 600-odd pages in one sitting throughout the night. And then reread it a few days later to catch up on all the details I’d missed on the first round. So, yeah.

And the second and third book were about on the same level for me (and as far as I’m concerned really are the best 3 in the series.)

But if any of you happen to read the Outlander series, you know it’s a long time between books – along the 5 year mark, in fact, for this last one. (Same sort of thing with any of these giant epics – Wheel of Time, Game of Thrones, etc. Lots of details and research are required and the amount of time needed to do it right can be substantial.) But the books we love are worth the wait, particularly when we’re invested in the story and the characters.

Thinking about the waits sometimes makes me sad – I know authors get bitched out for taking too long (and given that many authors are producing more books in shorter amounts of time, I can understand that frustration to a point.) But even so, mostly I tend to think of media as BM/AM (Before Mom/After Mom). Not all the time – but when it comes to book series she liked, yeah, sometimes I am sad that she’ll never get a chance to finish the Kushiel’s series, or the Outlander series.

Of course, I feel that way about stuff for myself too – there are always so many good fandoms to be a part of that it’s hard to think they are going to go on their merry way with or without you.

Which is why it can be such a disappointment when expectations aren’t met.

After waiting 5 years, I will admit I had some pretty high expectations for this latest. It’s not that the book was bad – it had all my favorite characters (and I’d actually gone and read all the Lord John shorts/novels over the last few months to help fill in some gaps) and it definitely picked up from where the last book left off…but in some ways it was almost too busy…and there were some plot points that felt repetitive from previous books.

And there were a LOT of characters – a number of which appeared to have plot threads that were dropped or went nowhere – and maybe they’ll get picked up in the next book, but at the moment I’m scratching my head as to their purpose.

Even Jaime and Claire felt a little…stale, maybe. Even though they are my favorite couple, after such a long journey through history, I’m sort of wondering what else is left to tell at this point – though I’ll happily keep reading their stories as long as they are being written.

Now, the book ended at a place that *could* be a series ending, but I suspect there’s at least one more book needed to wrap it all up, particularly when it comes to their children.

Either way, I’ll be waiting for it. 🙂

(And the Outlander series is coming out on Starz next month! The sets alone are looking nicely epic, so it will be eyecandy, if nothing else – though I really hope they nail it. And hey – early premier of the first ep on August 2nd!)

This entry was posted in blog and tagged not really a review, outlander, series, waiting. Bookmark the permalink.