I had a sleep study done last week on the advisement of one of my docs. It was mostly one of those things where they don’t necessarily suspect anything, but they want to rule out the particulars of sleep apnea or restless leg syndrome.

The good news is I passed with flying colors. The bad news…eh, still not getting a lot of good rest. The sleep doc suggested I probably had an immunodeficiency of some type, which yes, I do – but in some ways it was a relief to not have one more thing going on. (I really, really didn’t want to have to deal with a CPAP on top of everything else.)

I’m a pretty high stress person -my brain is always whirling with something, even when I’m so exhausted I can’t directly focus on anything. I sort of wonder if most creative sorts have issues with sleep for the same reason – whether it’s deadlines or just a brain that never wants to shut up.

In my case, the last few weeks have been a perfect storm of sleepless evenings. Between a few bouts of an ugly stomach virus going through the family, the sleep study itself (just, ugh. The wires, the tubes, the strange bed – how anyone can actually get a decent reading during the study is beyond me. I don’t think I slept well at all, and when I did, my dreams were full of Hannibal Lecter nightmares, so what’s up with that?)

And then, there’s the puppy.

She’s mostly Malamute, almost 9 weeks old, and a bit of a handful. (But so cute!)

Sort of nameless, at the moment – I had started calling her Maggie, since I thought that’s what the family had decided on, but suddenly there’s an influx of “I want to call her Shadow!” or “Oreo” or something from an anime.

Guess we better figure that out soon. >_<

However, she’s not exactly the most conducive thing to a good night’s sleep – it’s an awful lot like having an infant again. The good news is by the end of the first week, we are beginning to settle into a routine – she’s not overly fond of her crate still, but at least she’s not howling for hours on end anymore. (And she absolutely howls like a little wolf, so that’s been fun.)

On the other hand? My family room floor has never been so spotless, so it’s good and bad. 😉

But bookwise, things are okay. I’m officially out on submission with this next book – I’ll probably talk a little bit about what that’s like in another post, but it’s a good feeling to know I’ve sent it off. (It’s nerve-wracking too, but that’s just part of the deal.) This week I haven’t worked on anything other than passing out on the couch off and on when I get home – see lack of sleep, above – but it’s my hope that things will settle down a little more in the next few weeks and I’ll be able to make better progress on the next few projects. 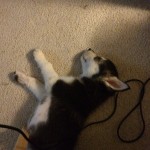 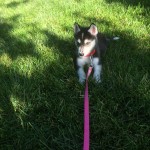 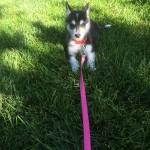 This entry was posted in blog and tagged allison needs to get more sleep, book stuff, is maggie her name?, puppy, sleep study, submission. Bookmark the permalink.