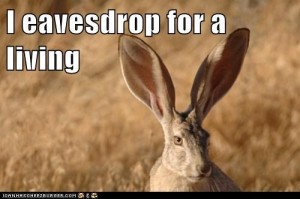 Growing up, I was taught that it wasn’t polite to listen in on other people’s conversations.

Sometimes it couldn’t be helped, of course, but gossip is one of those heady things. Sometimes we end up inserting ourselves into the middle of a dialogue, even if no one asked us to be there.

In the old days before the internet, creator – consumer relationships were usually limited to snail mail and in print reviews. These days an author can stumble over forums, reviews, tweets – everyone has an opinion and most aren’t afraid of throwing it out there for anyone to see. We can choose to interact..or not.

Not everyone wants us in their space, after all.

Through the use of tools like Google Alerts, I can be instantly notified if my books or my name is being dropped about on the internet. (Incidentally, Google Alerts doesn’t seem to be working for me all that well these days – I’ve switched over to Talkwalker and I find it’s much better at discovering the keywords == better results overall.)

It’s sort of a double-edged sword, though. On one hand, it’s great to get links to reviews or just random mentions of my books. (“Yay, people still like my shit!”) On the other? There’s nothing quite like getting that email with a link to where my book is being pirated or that online rant about how much someone hated X or Y.

But that’s part of the deal, though I do know some writers who never read reviews or do any poking about at all. They’re probably a bit saner for it. (And to be honest, I don’t go on Amazon or GoodReads much anymore. It’s just easier to keep plugging away with what I’m working on than worry about things that can’t be changed.)

I always try to be respectful, though. There’s this fine line between wanting to acknowledge readers – whether they’re gushing or hating – but the last thing I want to do is loom over a discussion one way or the other. That can tend to make some people self-conscious, and I value honest opinions more than anything else.

So usually I just stay away.

When you love something – a book, a movie, a game- so very much, you can build up this expectation about the creator. Surely they must love it as much as you? And wouldn’t it be awesome to have tea with them and gush over all those little things?

I should point out – I’ve done this with some creators and it was great. I’ve made some fabulous friendships and gotten some great networking contacts and fangirled over the fun bits. It’s just a ton of fun.

And then there are some creators that I wish I’ve never met or never interacted with because it made me realize they weren’t the person I’d built them up to be. And of course, it’s unfair to put a creator on a pedestal, but sometimes you can’t help it.  They made something that touches you in some way – how could they be anything other than awesome?

But then they open their mouths and…they’re homophobic, or racist or just plain old jerks. It sorta kills the vibe and sometimes taints my love for the item in question.

These days, I’m skirting the edges of a fandom I usually enjoy and I’m watching what happens when a Big Name creator gets involved – and how polarizing it can be between fans who either agree with everything the creator says…and those who immediately go on the defensive.

So where does the line get drawn? On one hand, I have to question this creator’s motives as to why they’re involving themselves in the discussions at this level. But on the other? I feel bad because sometime it seems like *everything* they say is immediately jumped on and pulled apart, and that’s not fair either. (Sometimes fans can be *extremely* entitled, but that’s a whole ‘nother post.)

I realize that I’m very tiny fish in an extremely large pond, so it’s unlikely I’ll ever be part of a fandom as large as this one is, but watching it from the sidelines has given me a lot of food for thought.

This entry was posted in blog and tagged fan-creator interations, google alerts, talkwalker. Bookmark the permalink.

2 Responses to Listening at Virtual Doors