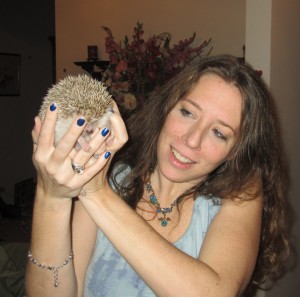 I had to say goodbye to Tumbleweed this weekend.

If you’ve followed me for any length of time, you know I’ve had an African pygmy hedgehog for about three years.

She’s been an interesting and amusing little thing – she certainly had her own mind made up when it came to things she did or didn’t like and though she was grumpy much of the time, she still had a particular charm.

However, over the last year or so, she had been slowing down. Her left hind leg began to fuse together at the knee, forcing her to walk on her hock instead of the ball of her foot. The vets had never seen that happen before, but it didn’t seem to slow her down too much at first. Over the next year I did notice that she wasn’t as active as she had been. The vets said she had arthritis in that leg and to give her cat chondroitin – which she liked –  and that seemed to help.

But she continued to slow down. She wouldn’t play as long as she used to and seemed to get 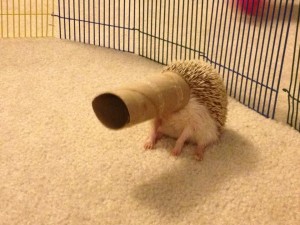 tired more. A few weeks ago I noticed that she was now “knuckling” on her right front leg. I suspect she may have been compensating for the rear left leg, but it looked awful. Imagine curling your hand in and down and walking on the wrist bone of your arm – that’s what she was doing.

Since she wasn’t running properly on the wheel anymore, her toenails had gotten crazy long, which probably only added to her discomfort. (I trimmed those up as best as I could. Not her favorite thing to do and it’s *really* freaking hard to cut a hedgehog’s toenails if they don’t want you to.)

And I took her to the vet. They did some more x-rays and didn’t find anything out of place aside from the bad knee, and gave me an anti-inflammatory to feed her for a week. And I thought she was perking up a little, but I could see the writing was on the wall, even so.

And then a week later I realized she wasn’t eating. Or running. Or playing with me when I took her out. Or doing anything else other than sleeping. So when she wouldn’t unball for me at all on Saturday morning (not even when I put her in her bath – and that *never* happens), I took her back to the vet.

Sure enough, she’d lost over 10% of her body weight over those last few weeks (which is a

lot for such a small thing.) And I noticed that the top of her head looked red and raw under the quills, as though she might start bleeding.

The vet told me hedgies tend to get tumors a lot – so the chances were good she had some form of cancer on top of the bad knee.

And I decided to let her go.

Even if I could manage to syringe feed her in the meantime, the fact of the matter was her quality of life was clearly getting worse and she was in a lot of pain.  And that wasn’t fair to her.

It was a hard decision and I feel like I failed her, but it was the right call.

This entry was posted in blog and tagged sad, tumbleweed. Bookmark the permalink.