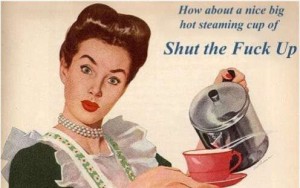 One of the things I’ve been doing recently is working through a pain management journal. Even though I know there’s an actual physical reason for a good deal of my pain issues, I do think there’s a mental component mixed in with it.

The journal has been helping me work through some of that – it’s become clear to me that I’m carrying a great deal of anger. About a lot of things, I guess. I’m not going to unload them here because it will probably bore the pants off of most people – plus as much I tend to share everything, some stuff does need to remain sacred…at least until I understand it better.

The theory is that if I can unload some of this anger, perhaps I’ll be able to manage my pain better. Even if it’s not a direct cause, holding everything in like I do is not helping anything. It becomes an ugly circle of cause and effect. The sad part is I’ve been doing it for so long I’m not sure I’ll ever be able to release it all.

I do want to mention two phrases that I think help contribute to my issues. The first is “No pain, no gain.”  We’ve all heard it – it’s used just about everywhere when it comes to doing things that are potentially unpleasant – usually in regards to physical exertion.

And you know what? I think it’s an okay bit of advice – when used in moderation. I’m inherently lazy – I can use a kick in the pants like everyone else, but when it’s taken to extremes it can lead to so many problems. Working through the pain can be cathartic, but it can also cause greater injury.

In my case, I’m in pain all the time – so I *have* to work through it to a certain extent, but I also have to listen to my body. Unfortunately, when it comes to exercise I have to limit activity to simpler things. It kills me – I used to be a track runner. I used to kickbox. I used to dance.

Now if I do anything more extreme than walking, I’m in for a world of hurt. (Hell, Disney was fun, but I woke up every morning so stiff I could barely move. Okay for vacation, but not a permanent basis. I have tried yoga, but I’m hypermobile – which means my joints tend to dislocate, so again. Careful.)

But of course, I still feel guilty or like a failure sometimes. Like I’ve somehow let myself down by not pushing through my physical limitation. If I were only somehow stronger, I would be able to manage it all better. Part of our “success” culture, I guess. The idea if that we just work hard enough, we’ll make it.

Which leads me to the second phrase. “Stay Strong.”

Although it’s also used in athletics, I heard it an awful lot when my mother died, particularly from some of my family members.  And the thing is, I tried. Maybe a little too hard. I didn’t even really cry for her funeral – just kept bottling all my grief up and up and up, because I was trying to “stay strong” for others.

I *still* can’t really let go of it, and I’m sure it’s contributed to my overall pain levels. If it doesn’t come out one way, the body is going to attempt to release it in another.  (Sort of weird to think of it that way, maybe – the level of pain being equivalent to one’s level of grief. If that’s true, I suspect I’ve got a pretty deep well of emotional distress.)

These days I’ve begun to wonder if that particular set of words is really meant for the person who needs it…or for the people saying it. Grief makes many people uncomfortable to observe  – and often at a loss at what to say, so I guess it makes sense they’d try to stop it (even if it’s subconscious.)

I’m not even sure what staying strong means. Not crying? Not getting upset? Why would you say that to someone who clearly needs time to grieve? In retrospect, it feels like a selfish thing to say.

This entry was posted in blog and tagged grief, pain, rambling. Bookmark the permalink.

2 Responses to Knowing the Limits