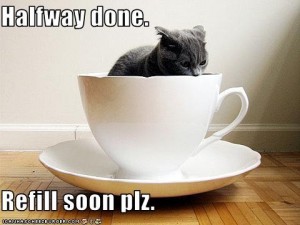 I tend to make a big deal when I hit the 50k mark of a WiP – even though in means I’ve still got a long way to go.

It’s a mental hurdle though, because it usually means I’m hitting that half-way mark. It’s all downhill from here. (Although in this case I’m not sure it is, but I’ll pretend it is, for the sake of argument. In truth, I think I’m aiming for another 70k, but I also need to leave some room for editing – there’s a lot of world building additions that are going to need be added/smoothed out, many of which I’m thinking about as I go.)

But it’s nice to get there either way.

I’ve got an actual story in play now, with plots and characters that I’m getting to know, so that always makes the rest of it a bit less intimidating than the start. Of course, my issue with pantsting is that additional plots pop up here and there and then I have to think about them a little bit to see if this is going to work or not.  I have been outlining this time around – not much, but enough that I feel pretty good about the story as a whole, though it’s grown into two books, as I suspected it would. (Or possible one 800 page monster, haha.)

I realize I’ve not been talking much about the plot or the characters – that’s just me being practical, I think. (Or superstitious, maybe?) I don’t want to get people interested in a story that might not sell. Disappointing on both sides, so it’s easier to wait until things start happening to get into it.

No writing yesterday though – as noted, the painkillers kept me away from rational thinking. Today hurts in a slightly different way, though I think it’s more from the plain physical trauma of popping holes into the discs, as opposed to the provoked pain I was getting before. Another day or so and I should be back to my normal self, though I could really do without these antibiotics. They’re killing my stomach.

New Fox & Willow up today as well (we missed yesterday for a number of reasons, but we’re back on schedule now, huzzah.)

Oh! And the thread on my forum is up now if you’re interested in interacting with Tonia about being a game writer. 🙂  (Go check it out!)

This entry was posted in blog and tagged back pain, fox and willow, halfway there, wip, writing. Bookmark the permalink.