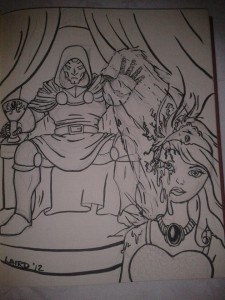 So I’m finally back home after several lovely days up in Toronto for World Fantasy Con. Back being an operative word since I’m fighting a killer cold and trying to catch up on sleep and work emails. But as much fun as I had, it’s always nice to come home to my own bed.

So – a few highlights. Toronto was nice, but the hotel was way out of the way of the downtown area, which meant I didn’t get a chance to see and do everything I wanted. Cabs were ridiculously expensive and some friends had cars, but traffic was an absolute nightmare. (Took one friend over 2 hours to get from the city to the hotel one evening, after taking her about 30 minutes going in the opposite direction.) So, to the friends I didn’t get to see, I’m very sorry and hopefully we can work something out in the future.

In the meantime, some basic highlights:

1) Wednesday night I headed into the downtown area for an Author Meet & Greet at Bakka Phoenix bookstore – got to chat up a lot of fun authors there, but I was pretty tired after traveling and called it an early night.

2) Woke up with a migraine. Really attempted to get some NaNo writing done, but honestly, most of the day became a quest to find something to take the headache away. As noted, the hotel was in the middle of nowhere and the hotel shop didn’t have what I needed. Eventually one of my roomies arrived and we were able to head out to a local grocery to find some stuff. (And traffic? 15 mins to get to the grocery store…45 to get back. Ridiculous.) But after that, I was able to get to some panels and rest. (And hang out at the bar with my friends later that night – including fellow Word Whores, Jeffe Kennedy and Linda Robertson)

3) Friday – Mostly just going to panels and then my reading that afternoon. (And thanks to all the people who showed up! And then the autographing session that night! (I signed a man’s clavicle. Which was pretty damn weird. And amazing.) Also, that evening I met the incredible Christopher Golden and James A. Moore…and this happened. Which directly ties into the picture at the top of the post. And is why I suspect I’m always going to be associated with Dr. Doom and Barbie. (The pic was drawn by the awesome Tonia Laird, who got up at 7 am on Saturday to draw it after I babbled at her and my other roomie Debbie about the craziness of the night before. So there you go – it truly doesn’t get much better than that. It’s a gift that keeps on giving. 😉 )

4) Saturday was more panels (and yes, I’m going to be blogging about some of those later on this week – interesting things being talked about and worth looking into a little closer.) But the evening ended with getting a chance to see Charles de Lint and company play some live music (just amazing, really) and I also got to hang out with Patrick Weekes (Bioware writer and author of The Palace Job  – go check it out, it has a unicorn too. Truly, Phin is rather smitten.)

5) I bailed pretty early on Sunday, but did get a chance to see Patrick’s reading. And again, traffic was lousy – even though I’d given myself what I thought was enough time to get to the airport, it cut pretty close due to getting stuck in a major backup. But hey, all ended well.

(And also, Debbie and Tonia – you guys were the absolute best! Thank you so much for making this con so much fun!)

Incidentally, NaNo writing has been absolute disaster this week, but I’ll be getting back on the bandwagon tonight and hopefully I’ll be able to catch up.

On a fantastic note, preliminary reports indicate that our beach house did survive Hurricane Sandy and hopefully with minimal damage. Should know more this weekend. (They haven’t been letting people on the island until very recently, so we’ve had to rely on third parties for information.)

Otherwise Fox & Willow was updated today so check that out!

This entry was posted in blog and tagged fail, fox and willow, nanowrimo, updates, wfc. Bookmark the permalink.