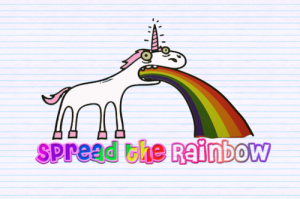 I get a lot of questions sometimes about my writing methods, such as they are. I always feel vaguely uncomfortable answering them because there isn’t any real big secret. The way I do things may not be the way you do things, and there certainly isn’t any sort of magic pill.

Except the Ass-In-Chair-Fingers-On-Keyboard sort. Because really, having all the writing rituals in the world isn’t actually going to write your story for you. Rituals are all well and good if they help you get into the proper mindset to work, but if you’re using them as an avoidance technique? That’s no good. (“I can’t write, right now! I don’t have my special candle/footwarmers/chocolate jellybeans, etc.”)

But one thing I can say that I don’t do around revision time? Read reviews.

Reviews can be a bit of a mindfield at the best of times, particularly on a site like GoodReads or Amazon, where they’re so nicely laid out for you – you can sort by comments or by stars or whatever.  (And sure, there’s a perverse masochistic side of me that will just look at the negative ones all at once. It’s a bit like yanking off a band-aid. “Here! Let me wallow in this vat of suck that is my prose!” And then I go kill something in WoW and everything is better.)

So, while I do read reviews, I can say that I don’t do it nearly as much as I did.

I think when your first book comes out it’s really hard not to. You’re so wrapped up in hoping people like it (and thus, like YOU) that it can be a bit of an obsession. Constantly checking  the sites becomes an odd emotional roller coaster. “ZOMG! They like me! I’m awesome! The master of all things literary!”

“ZOMG! I am the worst hack of a writer that has ever lived. I will burn my computer to the ground in effigy. And salt the hell out of the house afterwards.”

That sort of thing is hard to deal with sometimes even when you’re not under deadline. And it is good to get reader feedback, but the key is maybe finding the best time to do it. (Probably not when you’re trying to finish a book that’s due in a week – you really don’t have time for doubts at that point.) But while the review sites certainly make it easy for authors and readers to find and submit opinions, it has its disadvantages too.

It’s not hard for a writer to get somewhat addicted to that feedback – constantly searching for 4 or 5 star reviews – it’s an ego boost, to be certain. Which is fine in small doses, but if your writing depends on that? Sooner or later you’re going to crash, because you will never make everyone happy – and if you skew your writing to try to do that, you’re going to fail.

And it goes the other direction for negative reviews too. Negative reviews can sting – and sometimes they are downright nasty. It’s fine to get upset and rant at your friends or your computer – maybe the reviewer didn’t get what you were trying to say or doesn’t like your genre or maybe you have a line in in your prose that reminds them of this one time in band camp that turned out to be a disaster. Who knows? (And it really doesn’t matter – people like what they like, after all.)

But if you find yourself falling into a spiral of depression over it, then it is time to take a step back.

Negative reviews shouldn’t have any more power over you or your writing than the positive ones do.  (And so frustrating when it seems to be that way – they say writers need thick skins – and we do, but if you’re already frustrated or tired, those little jabs can completely suck the life out of your creativity.) I never really understood why we tend to give negative opinions more weight, to be honest.

Or why I do, maybe.   (In case you were wondering, yes – I am someone who *can* get sucked into a depression spiral, but as I noted above, it’s usually a culmination of outside influences or things going wrong, and already feeling shitty and then hey! “Oh look, it’s the confirmation I needed to prove to me that I suck!”)

So, yes. I tend to avoid reviews during times when I need to focus my creativity on new projects. After all, I can’t change what I’ve already pushed out to the world…but I can certainly make sure my latest attempt is the best it can be.

This entry was posted in blog and tagged reviews, revisions, unasked for advice, writing. Bookmark the permalink.