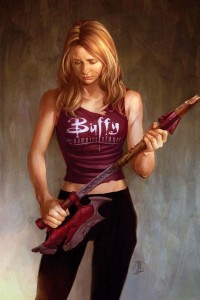 First off, let me preface this by saying I adore Buffy. I adore Joss Whedon. I adore Urban Fantasy.  So this isn’t a post geared toward stirring up any major sort of controversy or anything – just some general obeservations.  (And it’s not meant to be all encompassing – just my thoughts…)

I was doing a fair amount of thinking of genre over the weekend (in between revisions, of course. As one does, when you have a deadline looming over your head. >_< )

(Also, I should note this is going to get rambly and without purpose, as so many of my posts often do. Sorry about that.)

But anyway – when I was younger – my early and late teens – I was a pretty big reader of fantasy and sci-fi. Urban Fantasy as a genre didn’t really exist, but there were a few authors/books that fall under that umbrella. UF, of course being one of those genres where hey – it’s fantasy! But it takes place in an urban setting – so elves in New York, or whatever.

But back in the day it wasn’t as cut and dried as that. Everything was still labeled as “Fantasy.” I’m thinking “old school” UF – like Charles de Lint’s Newford series, for example. Or Emma Bull or Terri Windling or Tanya Huff.  Or Mercedes Lackey and her Bedlam’s Bard series (which I suppose could now be categorized as “Elfpunk,”) or her Diana Tregarde series. Or even Tom Dietz’s Windmaster’s Bane books (which started out in 1986 – and probably a huge influence on my own writing to this day.) Or Clive Barker’s Imajica. Or any number of other fabulous authors out there.

Stories where the setting was often as much a character as the characters themselves, and many had a sort of mystery that needed to be solved. A monster on the loose. Magic gone awry. Humans with or without special powers. Maybe a little bit of romance. Elves. Vampires. Faeries. Aliens.

UF was a “respectable” half-sister to the Fantasy genre.

And then Buffy came along. And all of a sudden, this entirely new “thing” was born – the literary generation of leather-clad, demon-slaying, kick-ass women. Vampires. Werewolves. Demons. And empowered young ladies  dating or destroying the things that go bump in the night.

Which is pretty cool.  Not that there weren’t books about vamps or vampire slayers/hunters before then. And to do a brief timeline – the Buffy movie came out in 1992…but it was a bit of a flop at the time. It didn’t really take off until the series in 1997. Laurell K Hamilton’s Anita Blake series started with Guilty Pleasures in 1993…and Tanya Huff’s own vamp books, starting with Blood Price, came out in 1991. So you can see there’s definitely a bit of overlap there…but for some reason, Buffy made women protagonists in supernatural settings acceptable.

And boom! UF was reborn – with stronger women characters everywhere. Buffy had seemingly paved the way for hipper fantasy stories with snark and sex appeal and this was a Good Thing.

But you know that old adage of how familiarity breeds contempt? I sort of feel that way about UF some days. And that’s not me crapping on the genre I write in – it’s just that with every trend, eventually the market gets saturated until it’s really difficult to find the things that truly shine.  After all – when all the covers start to look alike, it’s easy to become pretty jaded about the content inside. (I know it’s a marketing thing, but I sometimes really wish book covers could give us a better hint as to the story. Body parts and tattoos stopped being “edgy” about 2 minutes after that particular trend was born.)

And not every UF book out there is written by women – but there’s no denying the majority of them are. And unfortunately, that means that UF is now often pigeon-holed as “women’s fantasy.”  Which you’d think might be a good thing, but it’s really a rather dismissive opinion that gets bandied about by “real” fantasy purists.  (Writers or readers.)

Like somehow UF is ruined because it’s different now. (All those female gazes, y’all.)

I get really frustrated by that because fantasy writing in general has often been dominated by male writers and male protagonists. (And this is not to say one is better than the other – writing is writing, as far as I’m concerned.) Most of the sci-fi/fantasy books I read growing up were written by men, with mostly male characters.

At the time it was the status quo – I didn’t know anything different because I hadn’t *seen* anything different. (I was limited by whatever I could find at the local library and whatever my aunt had in her basement.) And yes, there were *some* that were written by women (eg. Anne McCaffrey, etc.) but for the most part, women characters were usually seen as something to be rescued, or bedded, or basically crapped on in some fashion.

A prize to be won.

So it’s not any big wonder that Buffy held the appeal that it did. As a character she had her flaws, she made her mistakes, she fought hard, she loved hard, she made terrible sacrifices and she saved the world.

(Which is a pretty big step up from some book I read when I was 13 and the woman  referred to herself as “merely a slut with a hot cleft.” Mmm. Hot damn, but where do I get in line for that?)

So I think one of the reasons post-Buffy UF exploded the way it did was because it was now okay in the mainstream to allow women characters to be who they were…and not have to apologize for it.

And yet sometimes it feels like I have to apologize for not writing a “real” book in a “real” genre. (Oh, it’s just Urban Fantasy, nothing major. Not like Game of Thrones, or anything cool like that.)

And that really, really sucks.

This entry was posted in blog and tagged buffy, rambly, think i lost track of what I was trying to say, urban fantasy. Bookmark the permalink.