Lucy insists she wants to be an author and an illustrator.

Which is fine by me. She’s constantly bringing home little books that she’s written. (And since she’s five, no, the writing doesn’t always make sense, but her explanations do – so she’s got a natural story-telling ability.) She’s just learning to really read for herself too, and she takes such delight now in reading TO me, instead of the other way around.

And maybe that’s a girl thing, because I don’t really remember Connor taking to it like that at all. He was bored in general with trying to learn to read, although now that he’s discovered real storybooks (i.e. Percy Jackson, etc – he’s all over them. They’re a bit above his age level, but there’s nothing wrong with that – I was reading Piers Anthony at that age, so fine by me. Anything that keeps him motivated is perfect.)

But it’s nice to see Lucy *really* want to break through that reading code. She’s so freaking proud of herself. 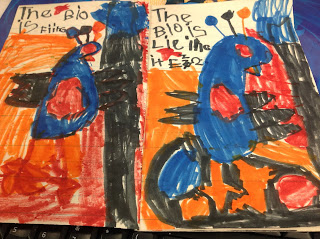 So yesterday, she handed me a book she’d written in school and declared she would be both author and illustrator. (It’s apparently about a bluebird daddy and a peacock mommy and their nest. Peacock laid 3 eggs, it would seem.)

And I said that was wonderful and if she’d like, I’d be happy to sign her up for some art classes at some point, because I’m all for fostering that if she wants to do it.

And then that childish arrogance comes out and she assures me she doesn’t need classes, because she already knows how to draw and better than most people, so why would she waste time with that? I told her that people almost always need to learn more and to practice more. I might be published, but I still need an editor. I still take workshops. It’s a never-ending process, really. 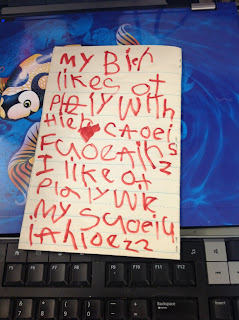 At which point, she gestures to her pictures and says she’s already been an illustrator and now she can move on and do something else.

I’m sure that’s partly because no one really *wants* to be told they have to work at something, but there’s a part of me that wonders at her confidence.

She clearly considers her stories top-notch. I think most children are natural story-tellers, with a natural inclination to think they have stories that are worth telling.

Seems a shame, though.

This entry was posted in blog and tagged connor, Lucy, metaphoric crap that is supposed to mean something deep but probably doesn't. Bookmark the permalink.

One Response to Who Needs Classes?