Vision to the Voice

I finally wrapped up the first chapter of something new the other night. I let a few people read it and the overall feedback was good, but the more I looked at it, the less happy I was.

So…I’m starting it over.

Which is odd, because I’m a big fan of at least getting a full draft done before I start mucking with everything (otherwise it’s way too easy to fall into the habit of the constant edit/rewrite. I don’t want to go there.) But I do think a story has a better chance at successfully being told if the “voice” is consistent with the muse.

Part of my issue may be because I’ve spent three years in Abby’s head. It’s hard for me not to look at a new story and not see her in there.

As much as I love writing her, this isn’t her story or her world or anything else, really. (And doubly hard, because I’m still quite heavily invested in Abby’s story – waiting for revisions for A Trace of Moonlight means that potential changes are percolating in the back of my mind all the time.)

But for the new story, the protagonist is younger and less educated, for one thing, so poetic observations about the world she’s in aside…it’s just not quite right. (And I don’t know if this is actually going to be a YA. I have debated it, but to be honest, it may not be in me to write one. Which is fine. I’m just going to write it as it comes and if I need to tweak it later, I will.) But the language she’s using is a bit more sleek than it should be, given her circumstances.

So…it’s back to the drawing board.  And it’s not a complete wash – I can use some of what I’ve got written, certainly, but I’ve got to peel away some of the “comfort zone” to find the essence of what I’m really trying to capture and see it through different eyes. (It’s a much more gritty story, I think.)

Sounds romantic, though it’s more frustrating than anything else.

On an unrelated note, a few promo things to mention:

1) RhiReading is hosting part of a blog hop for Book Boyfriends – go check it out to discuss a certain sexy incubus and comment for a chance to win a copy of A Brush of Darkness. 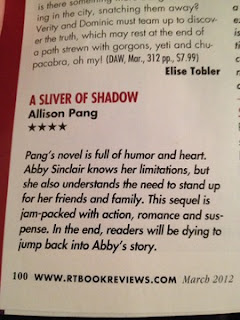 2) Pocket After Dark is releasing  A Brush of Darkness for free for the entire month of February. There’s also a sneak peek at A Sliver of Shadow (1st chapter now, 2nd chapter about mid-way through the month).

3) A Sliver of Shadow got a 4 star review from Romantic Times!  😀

4) I’ll be offline for Friday, because I’m going to the David Garrett concert with a huge group of friends and spending most of the day in DC. So, just a heads up. I’ll probably be a fangirling mess on Twitter. *ahem*