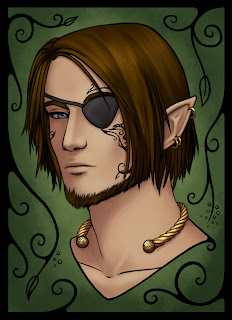 I get asked how I think of my characters a lot – particularly the weird ones. Phin. Brystion, etc. I mean, my world-building as a whole is filled with odd beasties and people. OtherFolk come in many flavors, and it’s a kitchen-sink world so pretty much anything and everything is fair game. Sometimes it’s easy – the characters just show up and I know exactly how they’re going to fit in.

Sometimes I don’t have the foggiest clue.

Sometimes they surprise me quite a bit.

Part of that is being a panster. Half the time, I really don’t know everyone’s motivation until I get there. As far as characters go, I still have to admit that Ion plays everything so very, very close to his vest.  I thought I had him pegged up front…and discovered I’ve barely scratched the surface. He’s one of the hardest characters to write, for that reason.

And that’s okay. We’ve worked out an understanding of sorts.

But today I wanted to chat a little bit about one of the new characters from A Sliver of Shadow. I’m not going to go into a huge amount of detail because I don’t want to spoil anyone, but this is maybe just a general overview of how characters come about for me. (i.e. part vague idea, part luck, part wtf.)

Readers were first introduced to Talivar at the end of A Brush of Darkness – he’s Moira’s brother – both a prince of Fae and Abby’s new bodyguard. He wasn’t planned at all. He was a placeholder of sorts, in fact. The end of BoD was very different in its early incarnation…and then the publisher told me to change it up a little – so I did.

Part of that was the inclusion of a potential new love interest. I wasn’t sure what to do for him at that point…and I was currently playing a PbP game in my forum based on Dragon Age. I was playing a Dalish elf I’d rolled…by name of Talivar. So I snagged his overall physical persona and tossed him in there.

In some ways this was a major clusterfuck. I’d already written nearly half of SoS…without Talivar (see above, with massively different ending.) And it wasn’t good enough to simply rip out mentions of Ion and plug Talivar into them. They’re different characters and would relate to situations and other characters in massively different ways. Needless to say, there was a *LOT* of revising – but that level of revision would have happened no matter what character I put in. Now – let me be very up front about this – although his original incarnation was based on an RPG game, Talivar is NOT a DA cut out. Some of his physical flaws – i.e. the eye patch – stayed the same, but his personality is nothing like my game character. The face tats are also there…but by the time I’d changed my mind about keeping them, BoD was already pubbed…and I’d mentioned them….so they had to stay. On the other hand, he’s the only elf in the current world with them, and they have no meaning other than personal preference. (Kind of a nice lesson there about writing – sometimes the smallest details have big repercussions later on – and even though Talivar only had maybe a page of face time in BoD, it was enough to set the stage for everything else.)

And  yes, there are elves and Fae in my world, but they’re based off the more traditional folktales and ballads, with a quick nod at Tolkien in several places.  (It’s 4th wall stuff, truly.) By the time I was done with him, it was more just a person with the same name. (And I’ve done this before. As I’ve mentioned several times, Phineas also existed as an RPG game character at one point as well – but at this point, they really aren’t much alike.)

So I set about refining him – there’s a lot of elvish politics going on in SoS. With Talivar being a prince, we get to see some of that first hand. As heroes go, he’s not alpha in the slightest – he’s got his own set of physical issues and old baggage to deal with (much of which won’t actually be revealed until A Trace of Moonlight.). But he’s also got some goof factor (i.e. Abby taught him to dance The Hustle at one point, so it’s not *all* just “My Pet Legolas” either.)

But I was still struggling a bit with his overall role, particularly as I started to think more along plot arcs moving into A Trace of Moonlight. And then I asked Darchala to sketch him out for me as a potential trading card. She made him with short hair…and gave him hipster scruff.

And everything clicked into place. Which sounds frightfully odd, but all of a sudden I knew his background and why he was the way he was. Most of which I can’t get into – you’ll find out if you read – but I went back   and added the scruff.  He still starts out with long hair (again, end of BoD…it was there, had to keep it initially), but halfway through SoS, he cuts it. It’s nicely symbolic and sets up for some very interesting things to come.

This entry was posted in blog, characters, dragon age, gaming, talivar, wtf am I doing. Bookmark the permalink.

2 Responses to Character Evolution: From RPG to Hipster Elf?