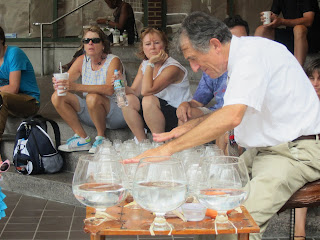 We walked in silence for several blocks, my feet knowing the way back without my having to think about it. Past the pawnshop and the Bagel Café, Fiddler’s Green Fine Irish Gifts and the Opera Alley where the buskers performed. A glass player sat there tonight, perched behind a table full of elegant crystal, his fingers nimbly plying his trade. It was late enough that most of the shops were closed, but we moved through the waning crowds without issue, the vibrato of the glass music echoing eerily between the buildings as we walked.


The thing about writing fantasy, particularly urban fantasy, is that parts of it have to be rooted in reality – if only to give the reader something to anchor to. Something about having a mental base of operations makes it easier to accept the fantasy elements, I think.

I will admit when I wrote BoD I didn’t really pay as much attention to some of the realistic world-building elements the way I should have. Part of that is because I never actually expected the book to get published in the first place. Part of that is because it was originally written as a PNR and not UF – I was more focused on the relationships between the main characters as opposed to the the character of the city itself. Oddly enough, I’m probably a much better world-builder when it comes to straight fantasy stuff so it sorta boggles my mind as to why I wrote BoD at all.

(Come up with the socio-political ramifications on currency due to trade in gold widgets in Fantasy-landia? Sure. Ask me to look up what time Radio Shack actually opens so I can reference it properly? FAIL.)

Looking back on that, I would say that’s one of the things I regret.  I do wish I had fleshed it out more. At the time I just knew I wanted to set a story in a place that vaguely looked like Old Town Alexandria. (I used to work there and would walk a mile or so from the metro down King Street to the office, no matter the weather.) It’s an old city – cobblestone streets in places, tons of little shops and fancy eateries, Irish pubs, and hundred-year-old townhomes that go for about a million or so. (If you’re so inclined to buy.)

The Torpedo Factory (yes – they used to make torpedoes there, but it’s now an art gallery, *ahem*) sits on the waterfront and was the basis for the a number of scenes, although I made up the inside for writing purposes.

However, the glass harp player in the above scene is a real guy. His name is Jamey Turner and he’s probably been playing down there for at least 20 years. (Mr myn remembers seeing him when *he* was a boy, so that’s saying something. When I lived in Alexandria myself, we would go to Old Town a lot and he was nearly always there every evening.)

He’s worth checking out if you get down that way.

Completely unrelated? I sorta wish this guy was down in Old Town too. (I imagine the scene might have been a bit different…and a tad more epic.)

This entry was posted in blog and tagged details, writing. Bookmark the permalink.

2 Responses to Grains of Truth