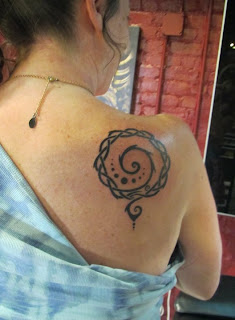 So while I was at RWA in NYC last week, I finally decided to take the plunge and get my first tattoo. It’s something I’ve been kicking around for years, in fact – but I’ve never had the guts to do. Hell, I commissioned the design from Darchala about three years ago, so it’s not like it was just a completely random occurrence.  The official title is “Endless Thorn”, btw.

But I sat on it. The idea of getting something so permanent is a bit daunting. Just the realization that you can’t really go back, I guess. Tattoo artists have to be amazing, if you think about it. As a writer, if I don’t like something, I can just delete it or change it…but when the canvas is another person’s skin? (Sure, it can be undone, but it’s a long and painful process.)

Anyway, I decided while I was in NY this past week that I was going to get it done (or at least investigate the possibility.) Not sure why, but it just felt right at this point, so Danielle and LaTessa and I went down to the East Village on Friday afternoon to Addiction NYC. (Danielle’s parlor of choice – she’s gotten her last several there.)  I admit I was totally freaked out about it, but I met the artist (Tom Solomon) and we discussed the design and the price. I had originally wanted to make it smaller, but he said he’d have to simplify it if I went any smaller and I didn’t want to do that. Plus, there’s a sort of “go big or don’t go at all” mentality that gripped me a bit.  I also originally wanted it in the middle of my back, a little below my neck, but given my history and current spinal surgery, I decided the right shoulder would be a safer place in case I need another surgical procedure. (Probably a high probability – don’t want to wreck it, after all.)

I made the appointment for later that night and after the RITAs Danielle and I snuck out and hit the subway. 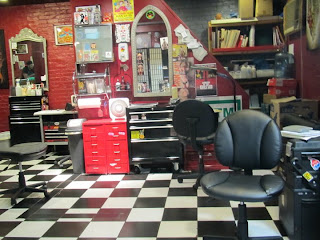 The entire process took two hours (starting from about 11 PM), so you can imagine I was a little punch drunk by the time I got out of there. I was definitely nervous about the pain – to be honest, I wasn’t sure if I’d be able to tolerate it. With the chronic pain I’m in anyway, it’s hard to tell if my pain receptors are screwed up.

So I sucked it up and it wasn’t too bad at all. Parts of it hurt more than others, but it’s a pain that I sought out and I think that makes a big difference. There’s a sort of mental trigger that went off once he started. I knew I couldn’t stop at that point, so I just relaxed and let it go. And yes, there was a small part of me wondering what the hell I was doing, but it was so surreal to just lie down on the table and give myself up to it. 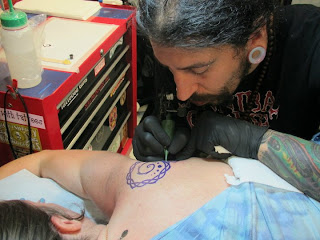 I guess you could say there was an element of sacredness to it, though I don’t know how I’d really describe it. It’s probably different for everyone anyway.

I’ve had a lot of people ask me what the design means. I suppose I could make up something fancy and pretend it has some great hidden secret into the inner workings of my mind. That would be a lie, though.

To be honest, I’m not entirely sure *what* it means. I simply knew I loved the design when I saw it – it “spoke” to me and that’s all that really matters. 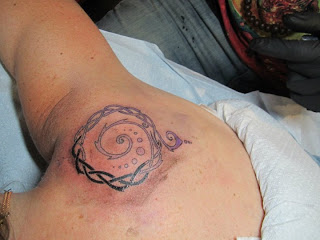 For the record, Melanie will be sporting a similar tattoo in the books at some point – it will probably be referred to as a representation of the CrossRoads, so there’s always that. 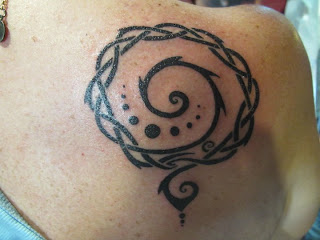 This entry was posted in blog and tagged crazy, tattoo. Bookmark the permalink.