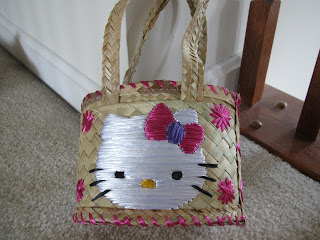 Because it just wouldn’t be vacation without picking up a Hello Kitty basket knockoff from the Bahamas. Freeport to be exact. 🙂

Anyway, I’m a little tired at the moment, so I’m not going to recap much here, but I’m back. I’m doing a mountain of laundry. I refuse to get on the scale. (OMG, the food. THE FOOD. The amount of bacon I ate at breakfast every morning should probably be considered a crime against pigmanity.) Of course the downside to that is how big my backside got, but I’ll get back on the diet wagon after RWA this week. (’cause really what’s the point?)

1)Grand Turk is full of donkeys. More on that later this week.

2) Renting a car and learning how to drive on the other side of the road in the middle of the pouring rain? So much more fun than paying for a taxi. Also? It allows for side trips to the local dumps to buy license plates.

4) Live band Karaoke. No- I don’t sing. But mr myn does. Mr myn got up and sang several times on multiple nights. He became a mini-celebrity afterwards, with random people coming up to us the rest of the trip and asking if he had a band. They shook his hand. They would just randomly say “Hey Dan!” as we got lunch on the Lido deck. It was soooo weird. And cool.  (The piano bar guy called him up out of the crowd one night and made him sing Desperado. LOL I have video. I will try to post some later this week.)

5) No internet. Actually, this was a double edged thing. The first day or so I was a total wreck. But I didn’t give into the temptation to buy the massively overpriced and super slow wireless on board. On the other hand? Writing in the lounge beside a lovely window == completed manuscript. Still needs one final polishing run, but THANK FREAKING GOD.

7) Falling asleep in a gently rocking bed. Kinda soothing once you get used to it.

8) Almost zero back pain. Apparently not going to work and lounging around on a boat in the Caribbean is a major stress killer. Apparently much of my pain is caused by stress. Le sigh. 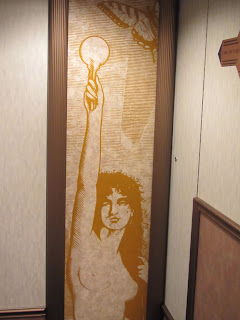 9) The decor. The ship was all done up in all these Romantic era paintings. Which means a lot of naked people in massive sizes. Everywhere. It also amounts to a lot of giggling and pointing from the kids. And me. *shrugs*

I don’t know what this girl’s issue was, but she was all over the place on the room floors. I just called her naked ping-pong paddle woman.

Think that about covers it for now. *ahem*

I’m off to do more laundry. And repack for RWA (heading up to NYC on Tuesday – hope to see some of you there!)

This entry was posted in blog, vacation. Bookmark the permalink.

One Response to Back from Vacation