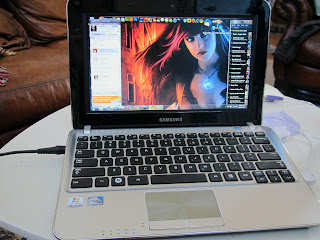 I bought a new netbook this past week. As much as I loved my little pink NC10, it was becoming rather obvious that the LCD was breaking down. I may attempt to get it fixed later, but in some ways the netbooks are almost disposable for the price. It lasted nearly three years of fairly heavy use and massive amounts of transport.

In other words, it served its purpose.  (And I can write off the expense of a new one, so I don’t mind shelling out.)

I adore my netbooks – I love their convenience, their size, and the fact that I can still run Photoshop CS5 without issue. They’re self contained, have wi-fi and a fair amount of hard drive space and you really can’t beat the price for what you get (most are well under $400). And no, I didn’t even remotely entertain the thought of an iPad. I have an iPhone and it’s enough of a distraction as it is. The netbook is strictly a work-horse writing device for me – the less extra crap I have on it, the better. Plus, minimum wi-fi iPad price is $500…for 16 gigs of space? No USB? No keyboard? No thanks. (Yes, there are external keyboards…that I’d have to carry around with me separately. Gee, sign me up for that.)

At any rate, I stuck with the Samsung brand again and bought their new NF310 – which is really just a slightly upgraded version of what I had before – including the 10.1 inch size. No funky pink color, but there’s an actual dual core N550 Atom (instead of the old single core), 3 USB connections, a built in SD card reader and 250 Gigs of hard drive space. Some of the other netbooks out there actually come with nvidia Ion graphics cards. This one does not – but it wasn’t a selling point with me since I don’t really have any desire to try to play WoW on it. However, it does have a native resolution of 1366 x 768, which is a heap better than the 1024 x 600 standby I was running at before. (And it does Hi Def videos now as well. No HDMI output, but nothing I care about.) Tack on a 9 hour battery life and a matte screen (I *hate* glossy screens with all the burning of a 1000 suns), and it’s pretty much an easy sell.

Extra bonus? The old netbook’s AC adapter is the same – so now I’ve got 3 of the suckers – one for work, one for home and one to carry in the bag. 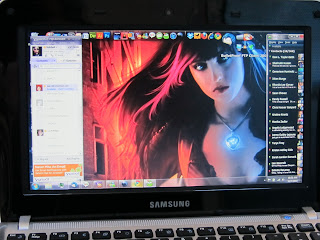 The only real bummer is that it only came with Windows 7 Starter, which is complete crap as far as an OS goes, but since I’d already paid for a license for Windows 7 Ultimate on the other netbook, I just transferred it over. (I also upgraded the memory to 2 gigs – it’s one of the few things you can do to the netbook and not break the warranty…and it’s frightfully easy to do.)

And incidentally, NewEgg is selling it for about $40 cheaper than Amazon.

This entry was posted in netbook. Bookmark the permalink.