What Happens If The Words Run Out? 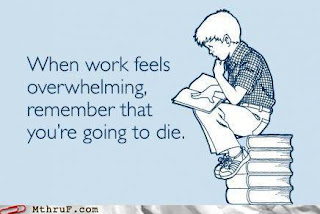 Okay – I don’t actually feel this way tonight. I just thought the picture was funny.

For the most part, things seem to be looking up. My father-in-law now has nearly 24 hour care set up at his house and that should help with the day-to-day stuff. I’ve been able to turn back to my writing this week, finally rounding past the 90k mark.

Which is great, except I’m just now heading into the start of the climax of the thing…but the draft version is becoming more complex as I go and I think it’s going to take a bit more than 10k to finish it up. (Probably closer to 15 to 20k). I suspect I’ll be chopping some of that out during editing, but for now I’ll run with it. There’s more than enough plot stuff to carry me into book 3, so that makes me feel pretty good about it all.

Still, I’ve got ideas for that book, and maybe one spin off, so far – as well as an epic fantasy stand alone, and an steampunk thing. But I was sorta wondering about what happens if I can’t think of anything else after that? (Assuming any of those ideas become actual words upon the page and…um…sell.)

Maybe an odd thing to be worried about but there *are* one-hit-wonder authors out there. I know of a few books that I loved reading (mostly of the fantasy genre), only to discover the author pretty much dropped off the face of the planet after that initial publication. Was it health issues? Lack of ability? Book sell so poorly that publisher dumped them? (And of course years ago we didn’t have the internet/e-pubbling capability that we do now. It’s quite possible that one-hit-wonder could certainly write for a limited audience and make a few $$ in doing so these days.)

Hard to say, either way, but even though I feel like I’ve got a pretty good imagination, there are times when I can’t help but worry.

This entry was posted in pensive, word counts, worry, writing. Bookmark the permalink.