Crystalline Knowledge of You. 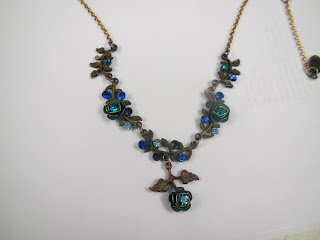 About two years ago, during my second trip to Vegas, mr myn and I stopped into the Michael Negrin store there. The stuff they sell is really over-the-top  – shirts, dresses, jewelry – all of it done up in lovely vintage/Victorian crystals.

Mr myn bought me the pictured necklace, which I’ve worn pretty much every day since then. I’m terribly hard on my jewelry, mind – I sleep in it, shower in it, pretty much never take it off. It’s one of the reasons I don’t wear much and it’s why I’m not interested in it unless it’s a bit on the hardier side.

At any rate, last year one of the crystals fell off – but we found it right away and we were able to glue it back on. About two weeks ago I noticed another one had fallen off, but we couldn’t find it anywhere.

This sort of thing drives me batshit. I don’t know if it’s an OCD thing or what, but I just start obsessing about the fact that it’s broken or not perfect or something – even though no one would ever notice the fact that it’s gone (most likely).

Now, Michal Negrin’s jewelry all has life time warranties…but you have to mail it back to Israel for them to fix it. If the metal had snapped, I would probably have considered it, but I’m a little too impatient to mail it off for the sake of a crystal. So I began my foray into the world of Swarovski crystals. 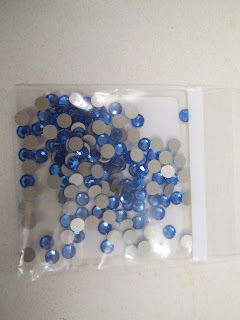 From what I could find there are two types – flatback and hotfix. The only real difference I could find was that hotfix was for using on things like cloth – shirts, jeans, quilts, whatever. So, flatback it was.  Then there was sizes and colors. These things come in a ton of sizes and colors. I found a couple of places online and attempted to eyeball it, but in reality you really shouldn’t compares sizes of stuff via a computer screen. Intrinsically, I know this. See impatient, above. I decided they were size SS12 crystals and a shade of blue known as Montana.

However, in my wanderings, I had a last minute of indecision and decided that the Sapphire blue might have been a good match too. Unable to figure it out, I bought a bag of each from Crystal Rhinestone Boutique.

And guess what? Sapphire was the right color…but the size was much too small. Ahem. CRB actually had a chart you could print out with the sizes – once I did that I was able to do the straight comparison and discovered my crystals were actually SS16. 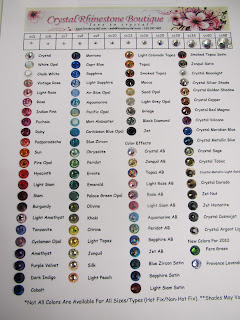 So, yes – I ordered another bag (and they aren’t expensive. Like $6.00 for 144 of the things. I figure I’ll use the others for something crafty later on.) In the interest of saving time, should it happen again, I also bought a really killer chart that not only lists the sizes (with actual crystals), but also all 150 colors, with the actual crystals glued on top as well.

Yes, OCD. Have I mentioned?

So, anyway, I whipped out my trusty E-6000 crafty-will-cause-cancer-if-you’re-exposed-to-it glue and pasted one of those suckers on there. It may not be *quite* right, but I can live with it. (In fact, I suspect it wouldn’t hurt to solder it a bit, but I’m not so good with the iron. Perhaps at a later time?) 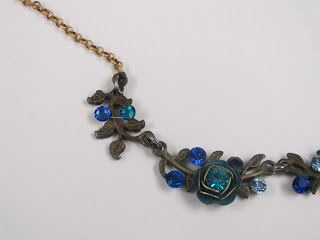 It’s that top blue fellow there –>

Looks pretty smashing, if I do say so myself. 😉

7 Responses to Crystalline Knowledge of You.