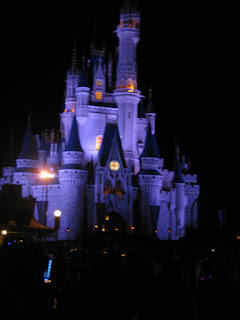 I blew off the Rita/Golden Heart awards on Saturday night to go to the Magic Kingdom.

Not because I wasn’t interested in them, or that I didn’t admire those who were up for winning. Just that it was the end of a long week and I couldn’t stomach another sit-down dinner and two hours of clapping.

Of course, it’s not like Disney World was pain free either. We missed the cut off to get the reduced rate tickets so we ended up paying full price at 6pm. (which is $84, btw. Hello,and bend over.) We got in line for Space Mountain. 20 minutes later, Space Mountain broke down. DW gave us Fast Track tickets for use later. 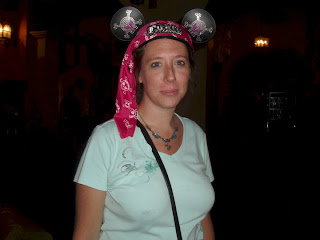 We made it to the Haunted Mansion and Pirates of the Caribbean. I bought a Pirate Princess hat and proceeded to prance about the park wearing it for the rest of the night. Both electric parades were canceled due to brewing thunderstorms that never happened. And by the time we looked for a place to eat it was 9:05 and all the nicer places closed at 9. So we ate hotdogs on the sidewalk with the rest of the hot and sweaty masses before heading back to Space Mountain and fast tracking our way through the now 70-minute wait time.

Was it worth it? I thought so. (As did my cohorts – Jeffe Kennedy, Laura Bickle, and Linda Robertson). And then we hit the bar to hang with Stacia Kane for a bit, but I ended up crashing early  – I had to pack and the shuttle left at 5:40 AM. 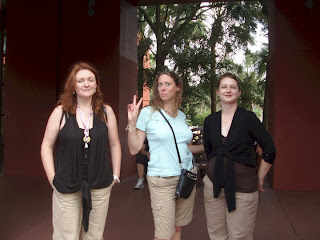 So, as far as the rest of the week goes – I’ve already posted about the awesomeness of the SteamPunk FF&P Gathering and my neurosis about author signings. I didn’t mention hitting Downtown Disney two days in a row for awesome company (again with Laura and Linda one day and Renee and Carrie on another) Said trips included stopping for lunch at Raglan Road and House of Blues, respectively. Full of NOMs.)

Thursday night was the Pocket Party – we were bused to Epcot for a private dinner at the Coral Reef Restaurant and then were given front row seats to the fireworks show (including a massive dessert set up.) After which we headed back to the bar at the hotel and I got to rub shoulders with Shayla Black, Kelly Gay and Kresley Cole, among notable others.) 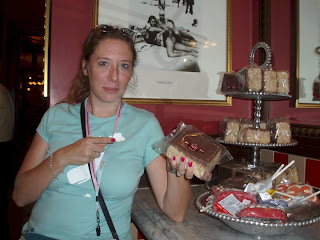 The rest of the time was sort of a blur of networking (Nikki Enlow totally kicks ass, btw), workshops, fab food, and yes, even getting a little work in. And also? Massively huge rice krispie treats.

Yes. I ate the whole thing.

This entry was posted in rwa2010. Bookmark the permalink.